It's a very rare feeling, these free Saturday afternoons I get. For one, they only come about once a month. Other Saturdays are filled with studying, trips, friends, family, or more studying. But that one Saturday, right after a test, when I'm in Baltimore, when my roommate's away, I can blast my music, light up my candle, drink tea, and play around online for as long as I want without feeling guilty (I'm such a rebel).

Last night, one of my best friends came to visit me in Bmore. He crossed mountains and rivers (e.g. downed power lines and train delays) to reach me in the middle of our first snowfall of the year. Isn't he a dear? 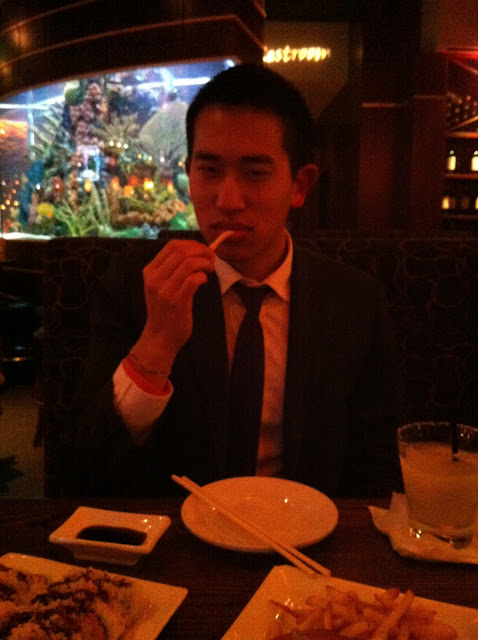 J being sassy, as usual.
We bundled up and headed to my favorite place for Happy Hour, Kona Grill. Now, Kona is not one of those hole-in-the-wall gems you can only find in Baltimore (I have plenty of those, but this is not one of them). It's right in the Inner Harborand is one of those confusing Asian-White fusion places that are hit or miss. Why do you serve both sushi and pizza? Burgers and pad thai? I don't understand it, but Kona actually pulls off the food pretty well, and you can't beat the prices for the atmosphere (note the giant fish tank) and service. I go there exclusively for happy hour, so I can't tell you about any of the normal food, but I've pretty much got the happy hour menu memorized. For example, this plate of sushi was only about $12! Other appetizers like flatbread pizzas and calamari are $6. 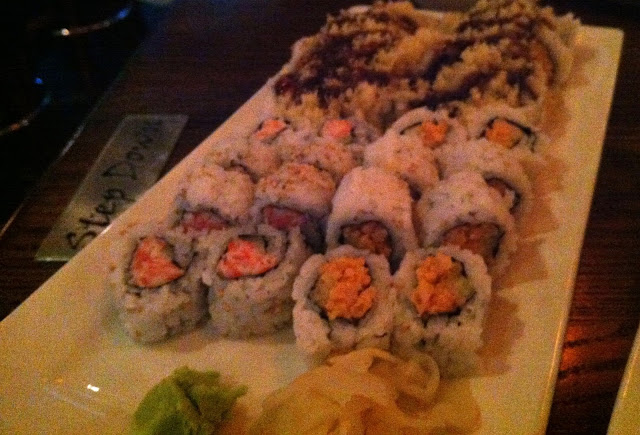 And see those two burgers in front of me? Those are "mini" burgers that are only $6. Plenty for two to share. 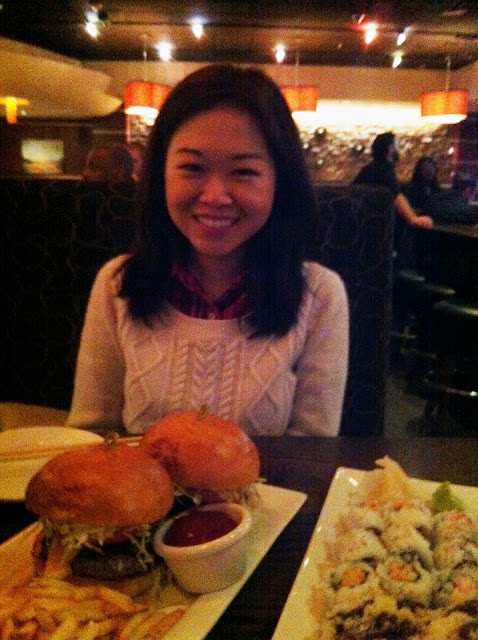 Baltimore's affordability is still one of its major selling points. Where else can you get stuffed off of burgers, sushi, and drinks (and still have leftovers to take home) for $30? I'm looking at you, DC or NYC. Alright, enough gushing about Kona. After dinner, it was about 12 degrees out, so we scrapped our plans to go out to a lounge in Mt. Vernon and ended up just curling up on the couch and watching Girls. #casual 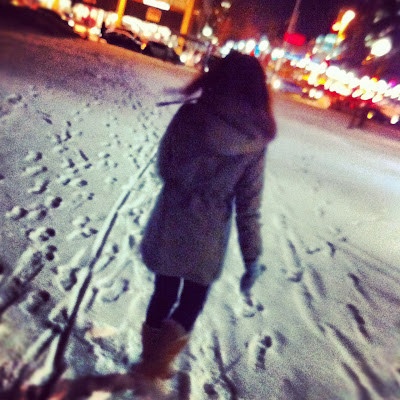 Fresh sprinkling of the first snow in Baltimore! Of course it all melted away this morning. 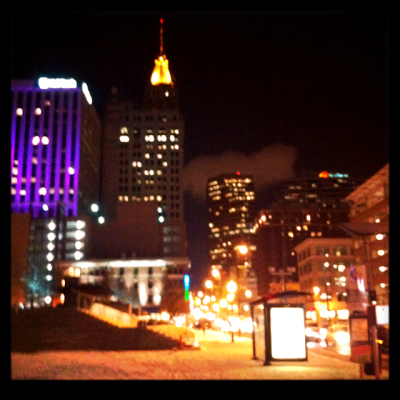 The building is lit up purple because the Baltimore Ravens are going to the Superbowl! I'm excited for the city, but could care less about football. 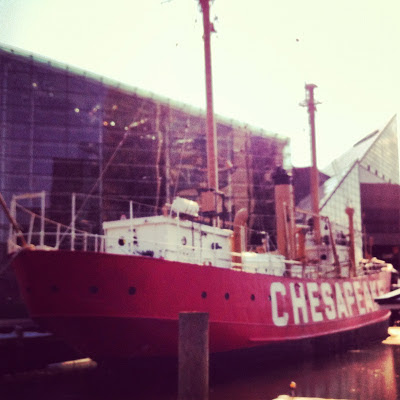 Inner Harbor this morning.
I was telling J that a year or two ago, I would have never wanted to stay in on a Friday night--I was the one who always wanted to go out, and often dragged J with me. His response was that it was because it was 12 degrees out. But I disagree (ok yes, I would have likely been wanting to out if it were a balmy 75, but before I wouldn't have let anything stop me!). I think I'm finally past that point where I want to go out every weekend -- now I would more often than not be happy enough staying in and watching a movie with friends, reading or literally going to sleep at 10. What has med school done to me?
FYI, reddit's time appropriate answer to "Is being a med student as hard as they say it is?" I read through a lot of it, and it is pretty accurate. My answer is a resounding yes. I don't necessarily agree with the top comment, in fact, I upvoted ferretnoise's comment and med-throwaway's comparison of medicine to learning a dozen new languages at once. If you're at all wondering what I go through every day, go read some of the comments. They can enumerate it a lot better than I can!
Anyway, after falling asleep while in the middle of watching a movie, we got up this morning and went shopping in the fancy schmancy Harbor East part of Baltimore (e.g. where the new J. Crew and Anthropologie are). He's the one who wanted to buy stuff, but instead it was me who ended up trying on a million things and buying nothing. Typical. But then we both bought matching City Sports Baltimore shirts and ate at Krazi Kebob, one of our favorite College Park eateries that recently opened up in the mall here. And then I got white corduroy jeggings at the Gap for $12.70. Teehee. You know, with the right people, you don't even have to do anything and can still have so much fun. So thanks J, and come visit me again soon!