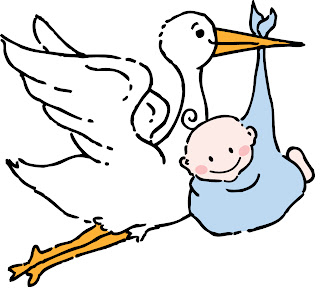 If only delivering a baby were this easy...
﻿
I've never had more up and downs in a day in my life than I have currently in my Labor & Delivery rotation at Baltimore Washington Medical Center. You go through the incredible high of pushing with a mom and delivering a healthy baby to the gut-wrenching low of delivering one twin while watching the second twin's heart rate decelerate on the heart monitor while the surgeon calls a crash c-section. I had to escort the father out of the OR when we started the surgery on his wife and explain to him that it was going to be ok, when I had no idea myself whether it was going to be ok. That's not even the worse thing that's happened -- that's just what I went through in the past five hours.

L&D has been among the toughest 2 weeks of my life, and I'm not even 2/3 of the way done (one more week!). Whenever you start a new job, you're never sure what to do on the first day. Where to sit, where to stand, what your responsibilities are. My very first day on L&D started off slow. I didn't really do anything the entire day when suddenly, there was a crash (emergency) c-section (which they usually call when the baby's heart rate suddenly drops) that had everyone RUNNING down the hall wheeling the patient to the operating room, where I was so scared and overwhelmed over everything going on in the OR: doctors yelling orders, nurses running around literally throwing supplies across the room, splashing betadine on the patient, asking me to run and get stuff from the other room, it was crazy. They got the baby out quickly, but those first few moments are just insane. Immediately afterwards, another patient came bursting through the door in unbelievable agony, jumping off the bed and screaming with each contraction. She barely pushed for 10 minutes before the baby came sliding out. After sitting around most of the day, it was just one right after the other at 5 pm. Boom boom. And it's been like that the rest of the time on L&D. I've slowly gotten accustomed to my role (hint: not much) on the team, but it's different because I shadow different people every day as well. You kind of have to feel out different providers' style and see what they let you or don't let you do. Usually I will just shadow the midwives (literally follow them around like a puppy...some people don't tell me when they're moving or going to do something, so I have to RUN after them so I don't miss anything), talk to patients and introduce myself when they talk to patients, help women push, do intake history and physicals, and recently, they've actually started letting me help deliver babies (and placenta's)! I "caught" my first baby yesterday and that was incredibly exciting, especially since I had followed her and her family the entire time she was in the hospital. That's probably my favorite part of L&D so far. Following a patient through the entire process of intake H&P, to witnessing their labor, to helping to deliver their baby and then following up with them on the "other side" for 2-3 days to see how they're doing after the delivery.

However, the day before, I was in the room when we broke the news to a woman that she had lost her baby at 30 weeks (past the threshold of viability and in the preterm range. In other words, they baby could have survived). At first we just thought it was a technical error because the nurse couldn't find a heartbeat, then the midwife couldn't find a heartbeat, and then we brought two doctors in who confirmed there was no heartbeat. We all knew she had lost a previous baby as well, and then to have to BE in the room while we broke the news to her, and then have her start crying and screaming uncontrollably with her family all around her, was just awful. I think everyone teared up in the room, I ran to get her tissues, and then we just left to give them some space. She came back today because even with a fetal demise, you still have to give birth to the baby, it's just not alive when it comes out. It's so tragic. You give them the exact same medicine to induce labor, you give them the exact same drugs (and an epidural) for the pain, they go through the entire process of labor, but they never get the end product that makes it all worth it. I didn't see the delivery, but apparently, the baby looked pretty normal for being dead, and they put him in a little hat and the mom and dad hugged him before they took him away. Thank goodness for the doctors, nurses, and midwives who do this on a daily basis, because I have never been so sure to say that I could NEVER do obstetrics. I work 7 am - 7 pm every day (the midwives and doctors work 24 hours shifts though). I usually leave at 6:40 am and don't get back until 8 pm. Keep in mind I'm still a student, so I don't get paid for any of this, even though I'm doing everything the provider is doing. And then I have to make dinner, shower, and then try to go to sleep so I have enough energy for working 12 hours the next day. It's a vicious cycle. I had to schedule a night in yesterday so I could do my laundry. I currently have a pile of clean laundry sitting on my floor because it was either write this blog post or fold my laundry. Of course there are pro's and con's to every specialty, but the con's far outweigh the pro's (very focused problem problems and plans of care; usually young, healthy patients; diverse patient population) of this specialty, and I cannot wait until this is over. Everyone who knows me knows I'm a pretty strong, even somewhat cold and emotionless. I don't cry often. But I've cried, or teared up, more times over the past few weeks than I can remember. The emotions are just overwhelming. The first night I got home (first emergency c-section), I cried going to sleep. Today in the OR, after pushing with her for an hour, encouraging her, supporting her, victoriously getting the first twin out and then suddenly having everything spiral downward so fast, I just wanted to go home and cry. So I got out of the OR as soon as I could.

And the worst thing is that I feel like I've just been through this life altering experience and no one else understands. In the grocery store today, I was walking around in a daze. When I was picking up my fruits and vegetables, I felt shell-shocked. I wanted to shout to the world that I just witnessed the birth of twins, one via emergency c-section and witnessed the fetal demise of another baby. But of course, other people don't know what you've gone through and life goes on, which is why sometimes I find it hard to talk to non-medical people because they don't know that we have to deal with life and death every day. And I guess this is me coming to terms with the field of medicine. They never taught you how to prepare for this in the first two years of med school. And maybe at the end of my third year, I'll have become one of those seasoned, even jaded doctors who are unfazed by anything that comes their way because that's the only way they can do their jobs, but right now, it's still hard.
Labels: medicine