I moved to San Francisco!

It's been a month since I moved to San Francisco--about time for a blog update! 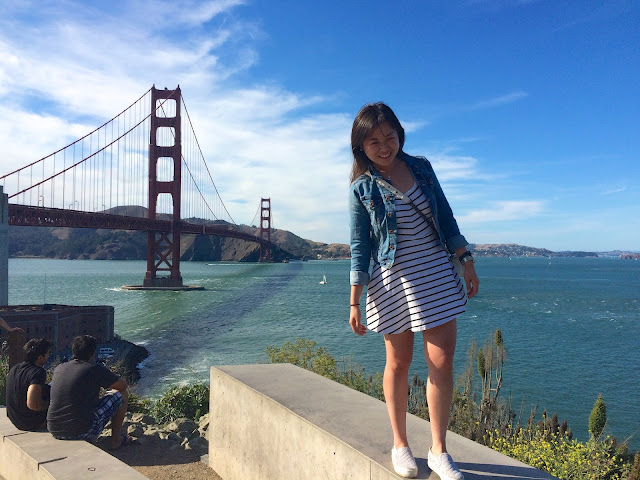 My first month in SF has been idyllic. I'm on a super-easy rotation that's 8a-5p, leaving me plenty of time to learn, hang out with friends, and explore the city. In my past month, I've gone to concerts, pride parade, street festivals, witnessed an NBA championship, eaten some delicious food, and taken a million pictures of the Golden Gate bridge. The ones were taken on my warmest day yet--68 degrees and sunny! 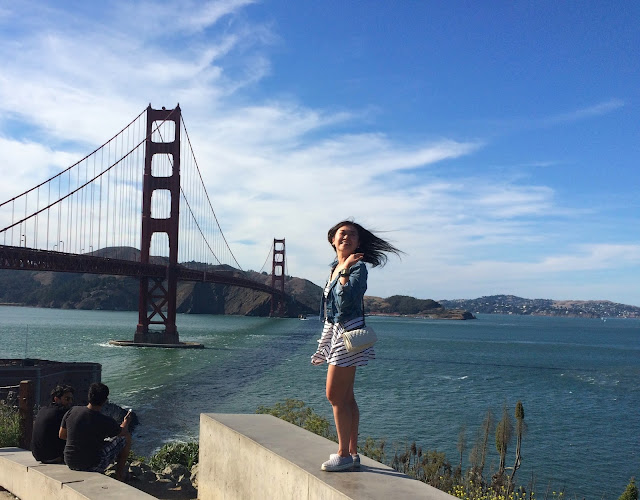 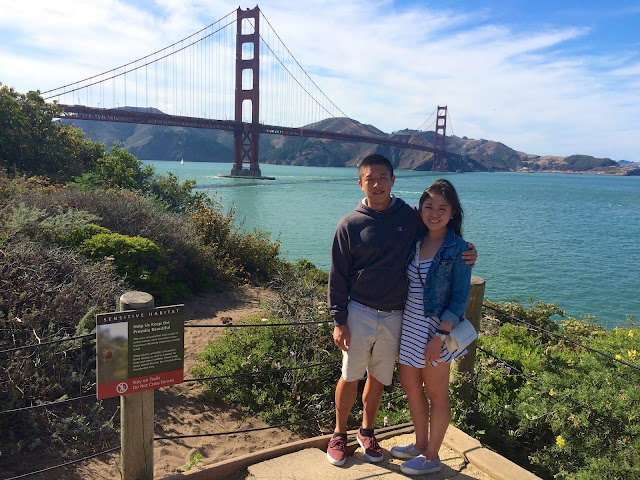 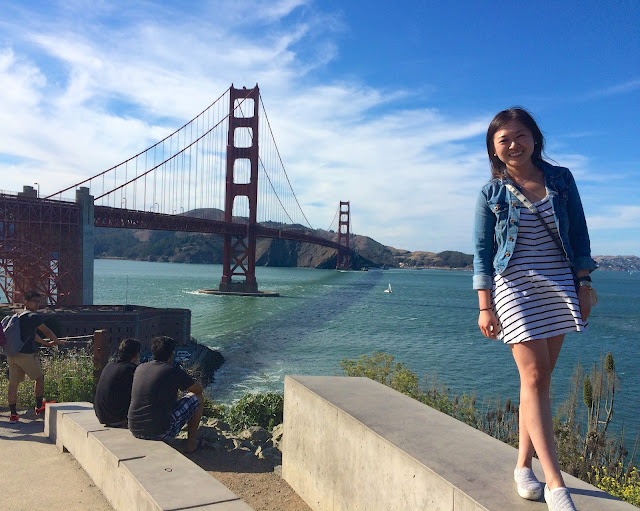 I've caught up with people I haven't seen for years and met dozens of people who all went to the same high school back in Maryland who have all relocated to the Bay Area. It never ceases to amaze me when/where I see a fellow Blair alum. Yesterday I was walking in the Ferry building downtown when a classmate from Blair randomly bumps into me who is visiting from Seattle. Then today, I met up with another friend at a concert whose sister and her boyfriend were also there--they also went to Blair. All in all, 5 out of the 9 people in our group ended up going to Blair, and we didn't even plan on it! Afterward, I went to dinner with 5 more Blair people, 4 of whom I hadn't seen since high school. Talk about a small world.

I haven't only been hanging out with Blair people. I've gotten to know some of my fantastic fellow interns and residents who I am so excited to be starting out this journey with. I already feel such a sense of camaraderie towards them that I can't wait to see what the next three years will bring. 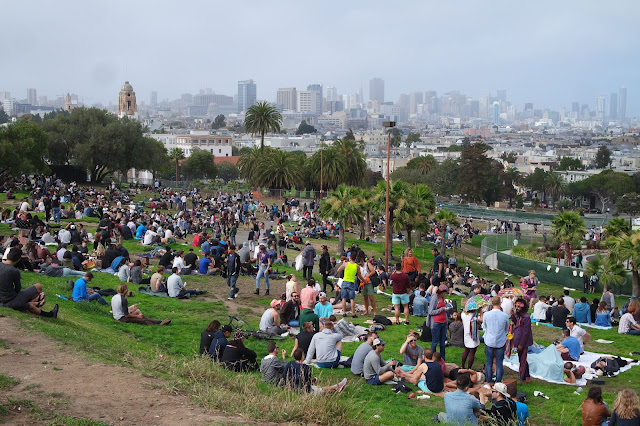 Obligatory visit to Dolores Park, the tanning bed of SF 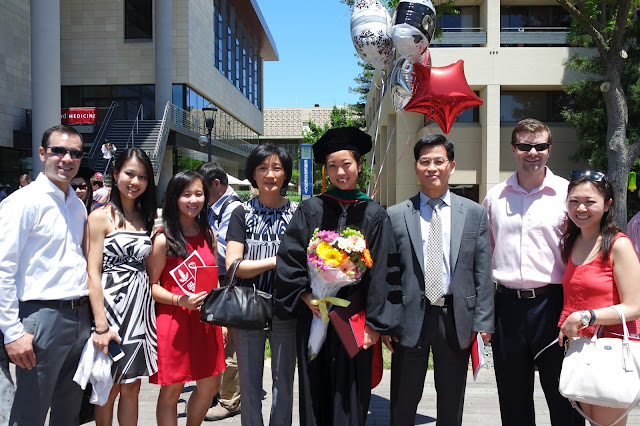 Another major accomplishment this month was finally finding housing in the city! After a grueling, grinding, and expensive house hunting process, my sister and I finally found a place to live next month in the Richmond district. It's known for being a quieter, more residential neighborhood with a surplus of Asian grocery stores and Asian restaurants, a stark change from the hippie mecca my current neighborhood is. I move in next week and my sister comes the week after that. Although my living situation right now is great, I'm ready to finally have a permanent home again, something I haven't had since last year! 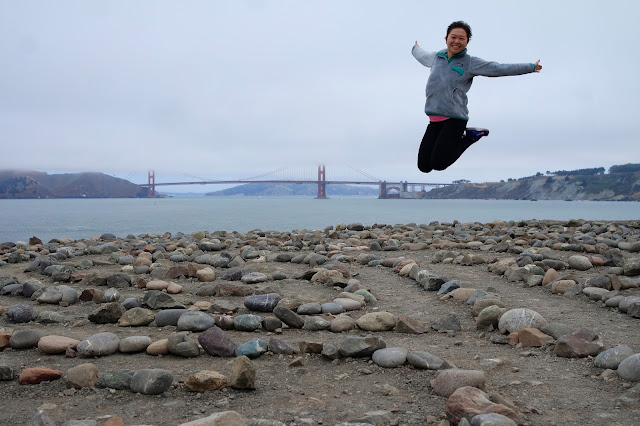 A cloudy day in Land's End. But excited to move to my future hood! 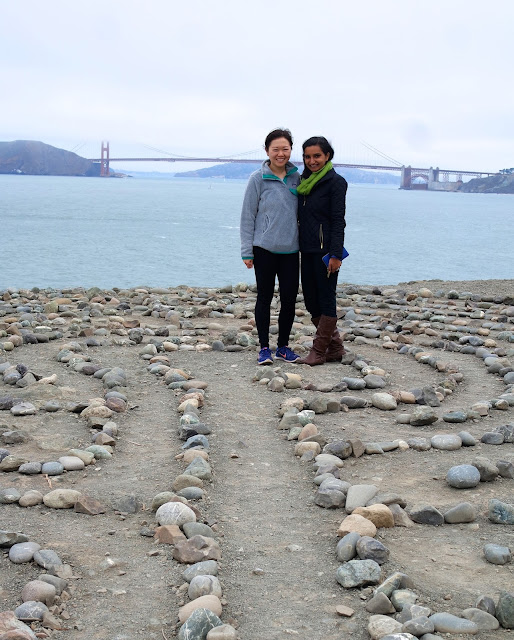 Bonding with my intern life twin 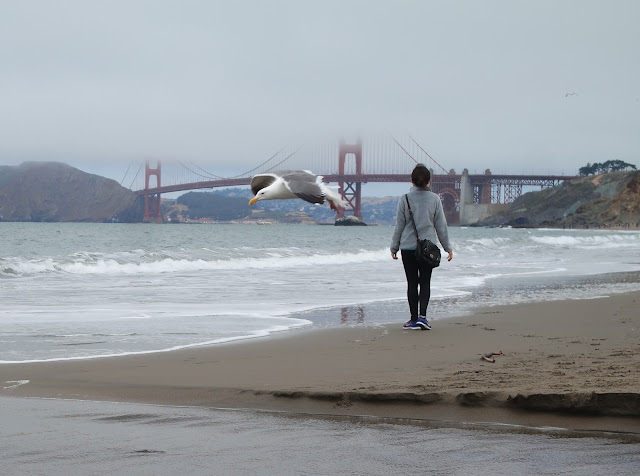 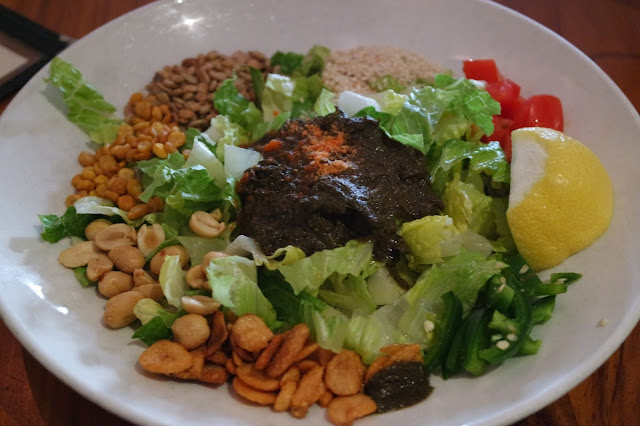 The famous tea leaf salad at Burma Superstar, one of the famous Burmese restaurants in the Richmond 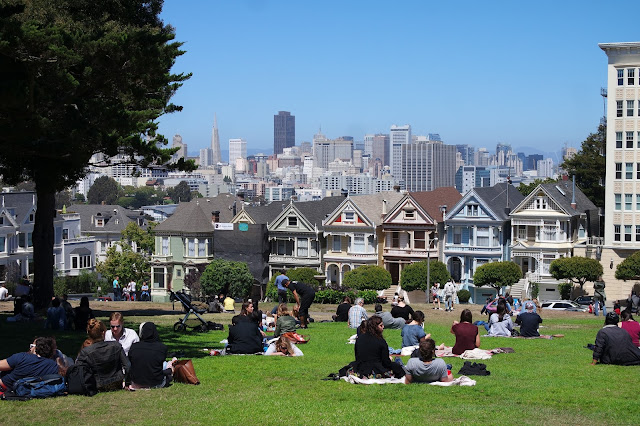 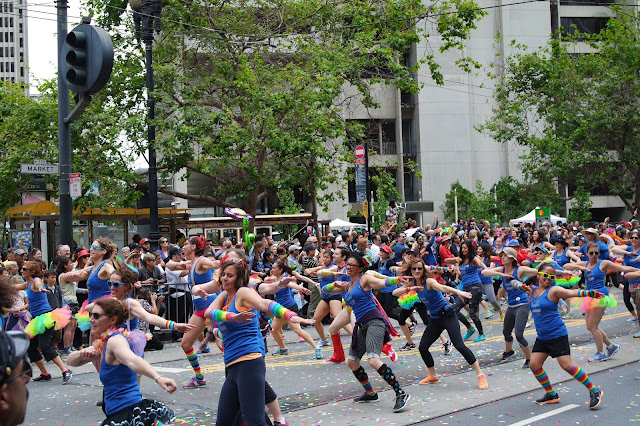 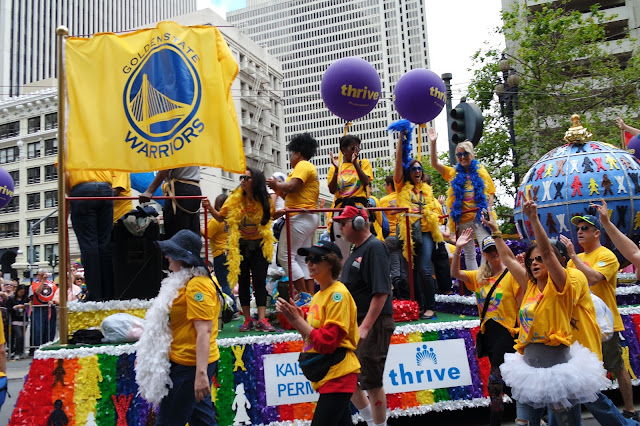 The Warriors' float in the SF Pride Parade 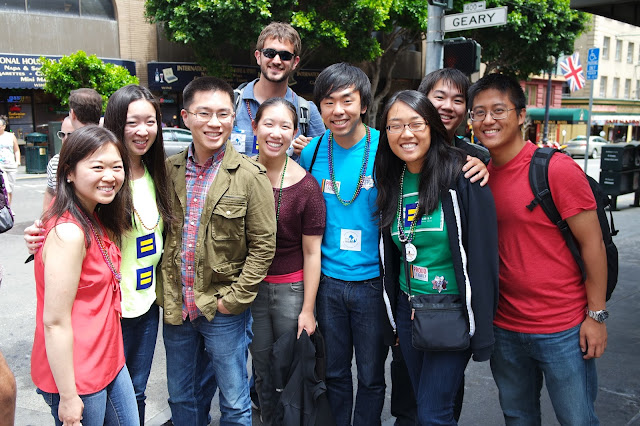 As part of my SF initiation, I even got to escape the city to experience the grandeur of Lake Tahoe for 4th of July weekend. Tahoe was the vacation spot all my Californian friends went to growing up, so I was excited to see what the hype was all about. Even though we went probably one of the busiest weekends of the year, it still felt amazing to soak up the sun, lay on the beach, swim in the (freezing) clear lake water and hike on a trail that led you through mountains and waterfalls, just a few hours away from the city. 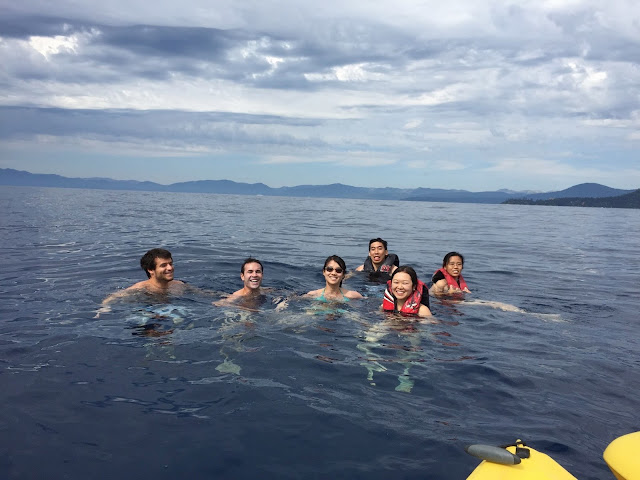 Kayaking and swimming in the middle of the lake...brrr 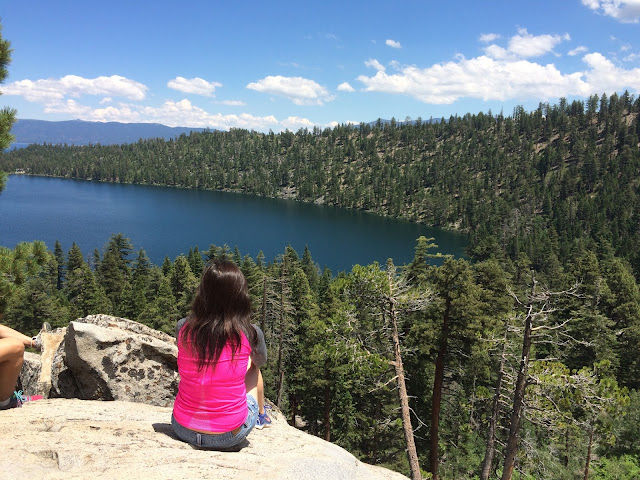 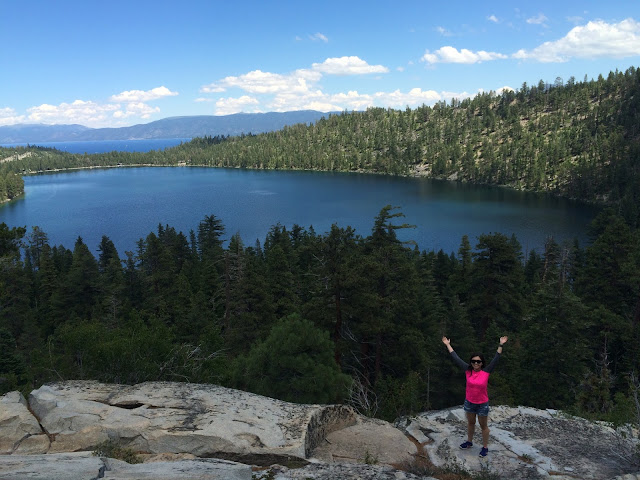 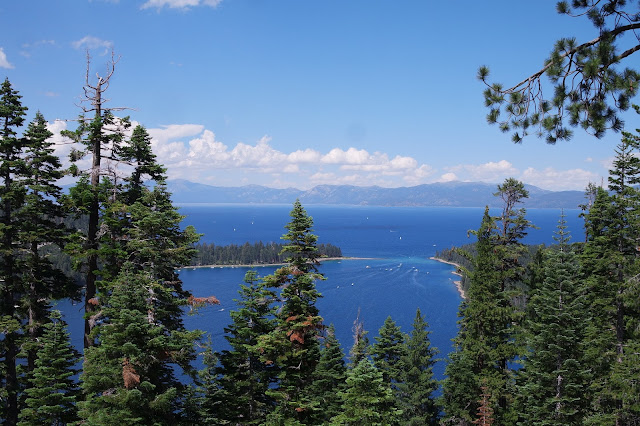 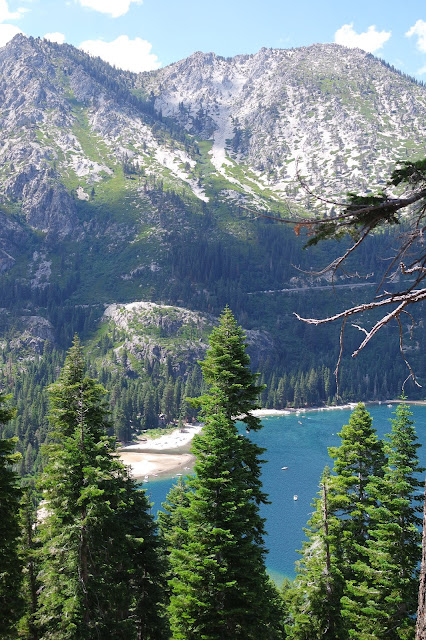 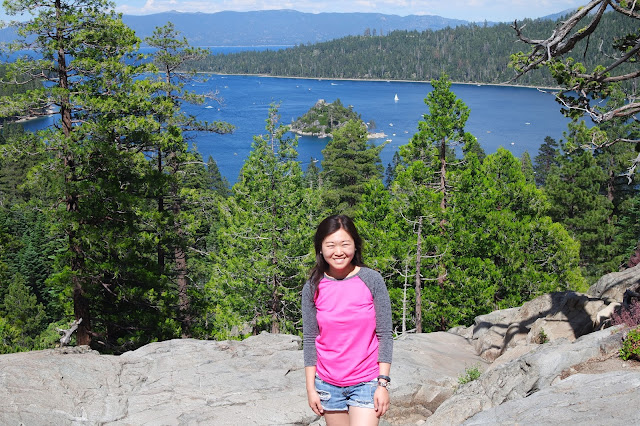 As a resident, I'll take any weekend that I can get and to make it to Tahoe was a dream come true!

I've also been gorging myself on all the city's endless eats (I've been to 3 Burmese restaurants already), frolicking in the city's popular parks, and playing the tourist at Fisherman's Wharf and Pier 39 because my free time (and weekends) will soon come to an end. Next week, I'll be starting on nights, where I go to work at 8 pm and admit patients until 9am, and then sleep the whole day. On my harder medicine wards and ICU rotations, I will only have one day a week off which I'll use for catching up on sleep, and no weekends off. Goodbye sun, goodbye friends, goodbye world. Til then, bring on more week of carefree living!
Labels: life