In the spirit of making the most out of the time I have left in SF, I went on a last-minute trip to Tahoe with my roommates recently. 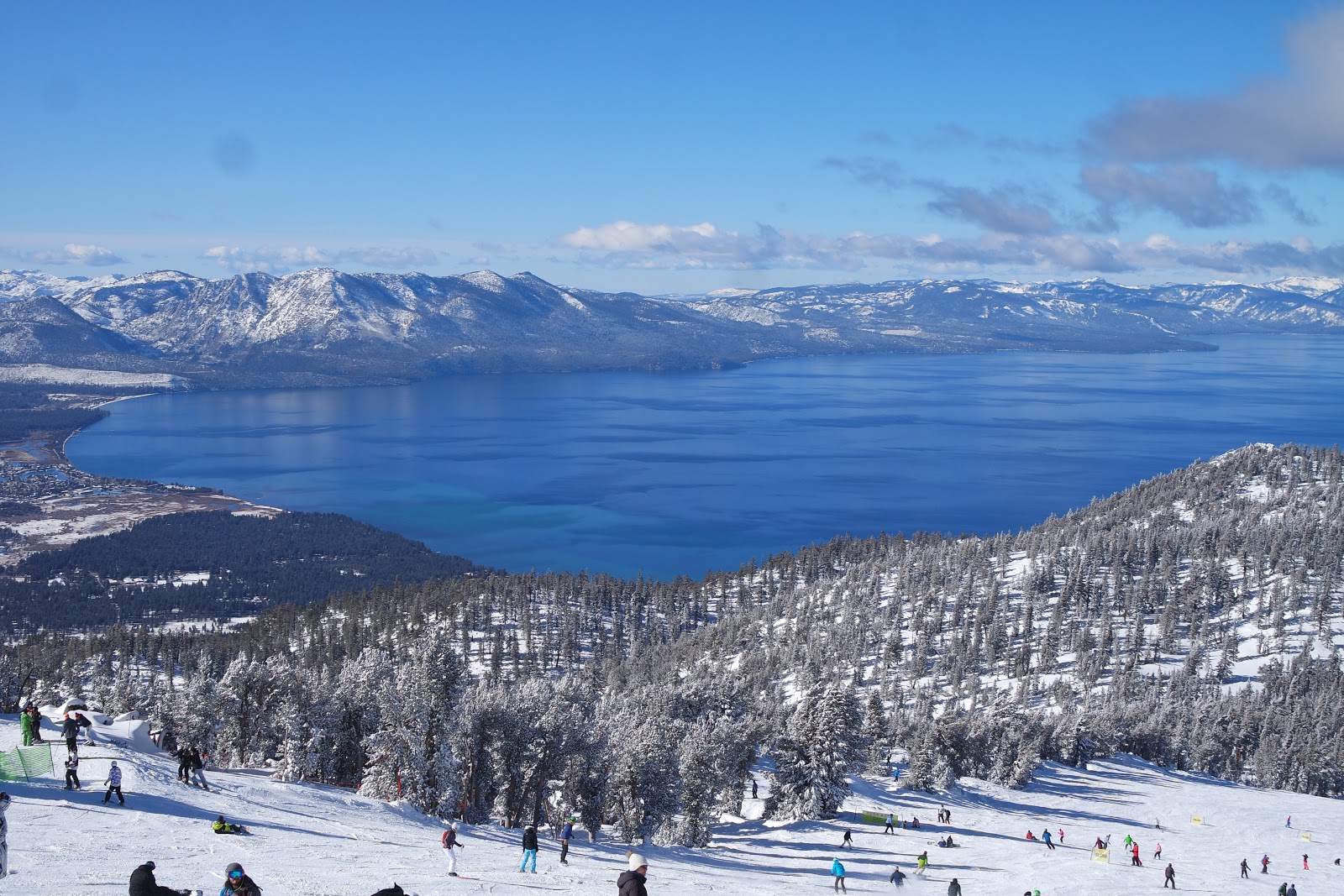 I'm not a big skiier or snowboarder, in fact I don't like being cold or winter activities in general, preferring the warmth of a cabin, hot cocoa, and games by the fireplace. In fact, I last skiied over 10 years ago in high school on the bunny hills in Pennsylvania and thought the investment was so high (time, energy, and money wise) I haven't gone since. But I knew I wanted to visit Tahoe in the winter, so when a spot opened up in my roommate's skiing trip last minute, I jumped at the opportunity to go skiing in Tahoe before I leave California to see what all the fuss is about.

After a rough night where we couldn't physically reach our Airbnb and had to stay at a roadside motel at 2 am (more on that later), we hit the slopes bright and early. I fully intended to start easy, on the bunny slopes if need be, since I hadn't skied for so long and wanted to ease my way back into it. However when we arrived to the ski lift area, I noticed that there were no beginner slopes on this area of the mountain! Since I had no way of driving to a separate part of a mountain to access the easier slopes and didn't want to be separated from the group I had no choice but to go down the intermediate slopes or die trying. As we were riding the ski lift up, my throat caught in my chest and I seriously doubted my ability to make it down the mountain. As I got off the ski lift and looked down, I knew I had no choice but to ski down unless I wanted to walk down the entire mountain. My mom's voice echoed in my head...I had worked so hard for my future for me to die skiing or suffer a broken arm or leg now! 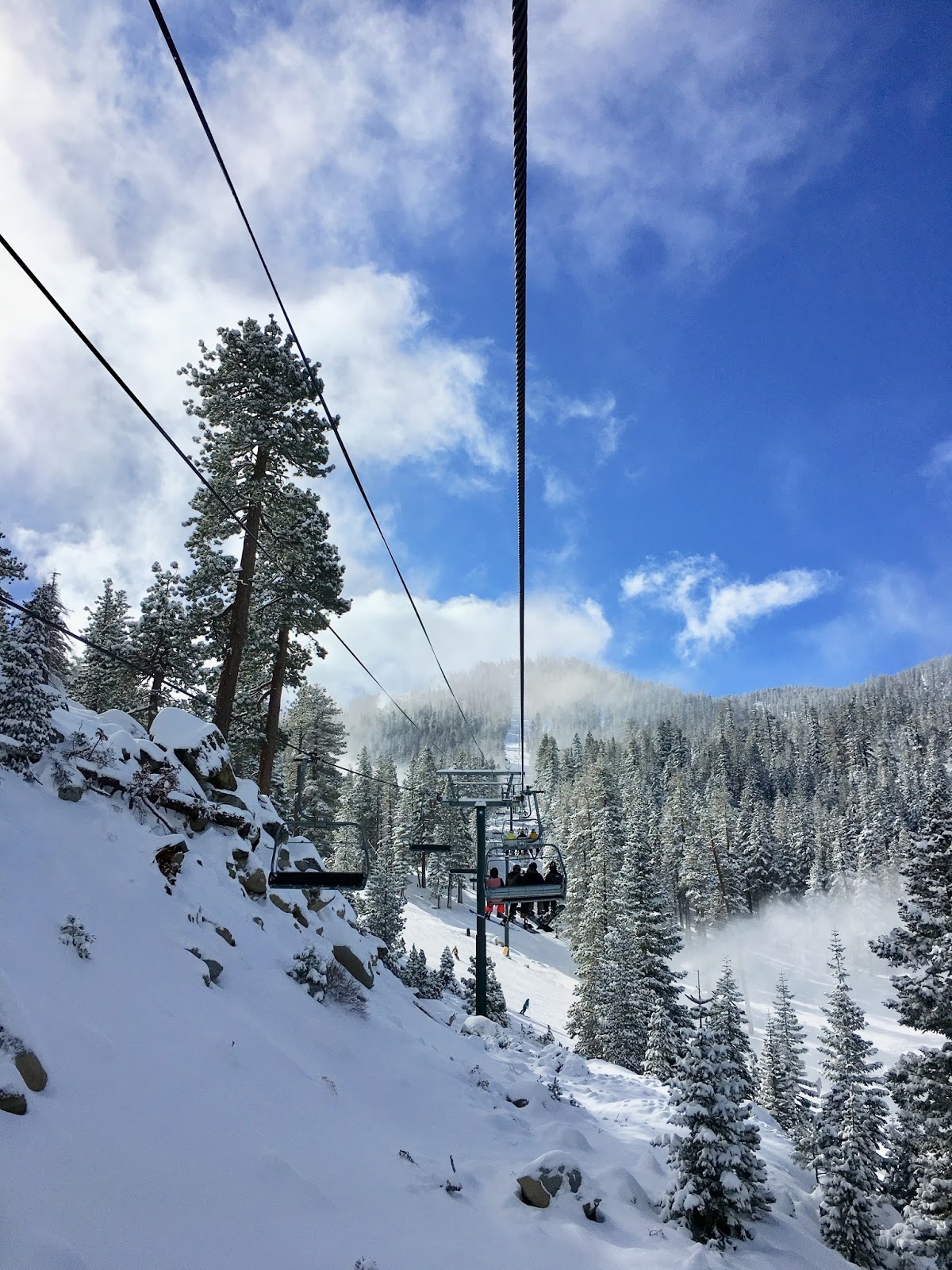 Filling with dread on the way up the mountain
BUT after a rocky start with many many falls, I actually did get the hang of it and ski down the mountain with the help of one of my friends (from Canada) who patiently waited for me after each run and coached me through it all. I really don't think I would have made it if it were not for his tips and tricks. After a while I did feel more confident and started enjoying it more, sending him on his way, and even able to pause and take some of these shots. 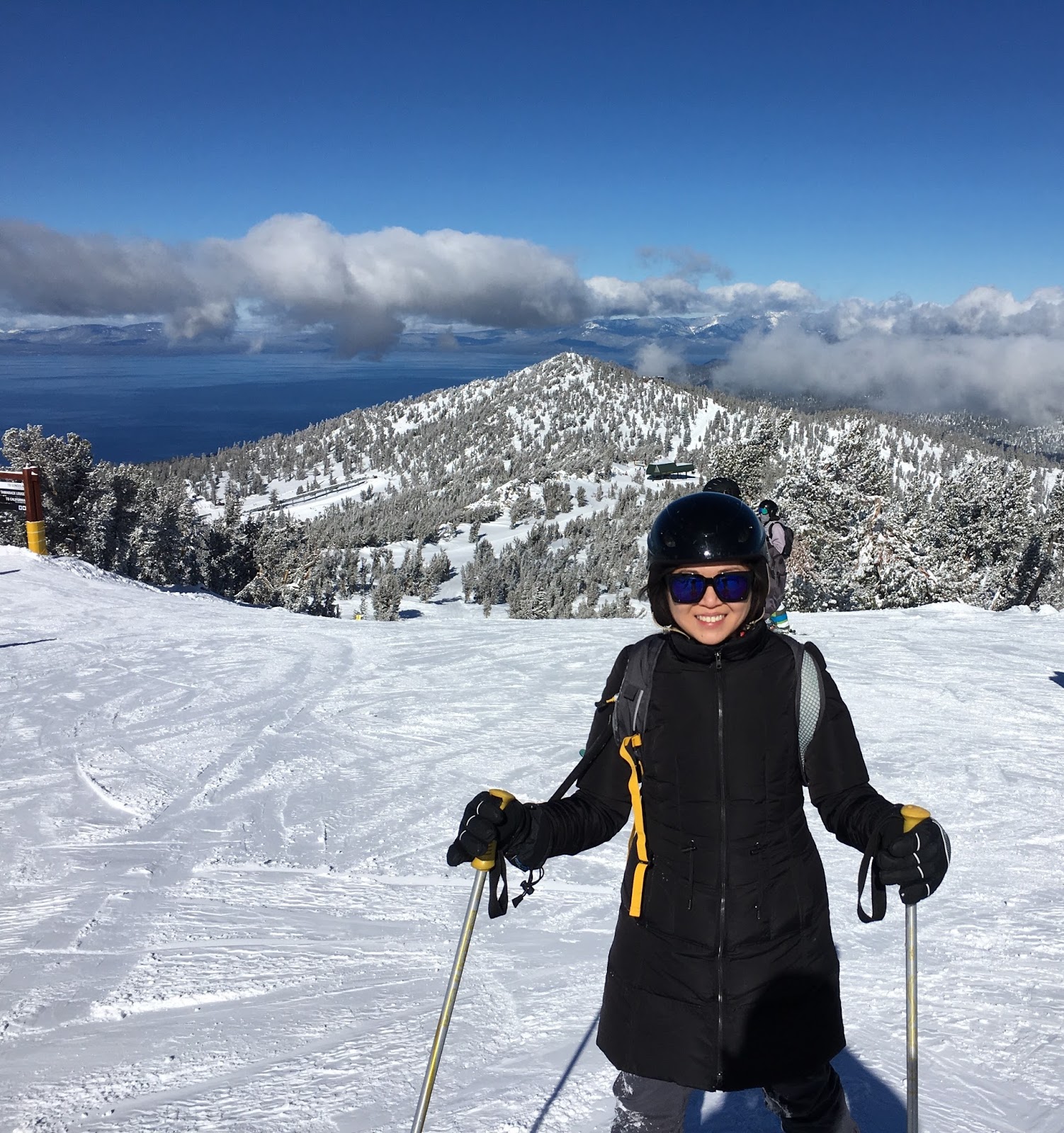 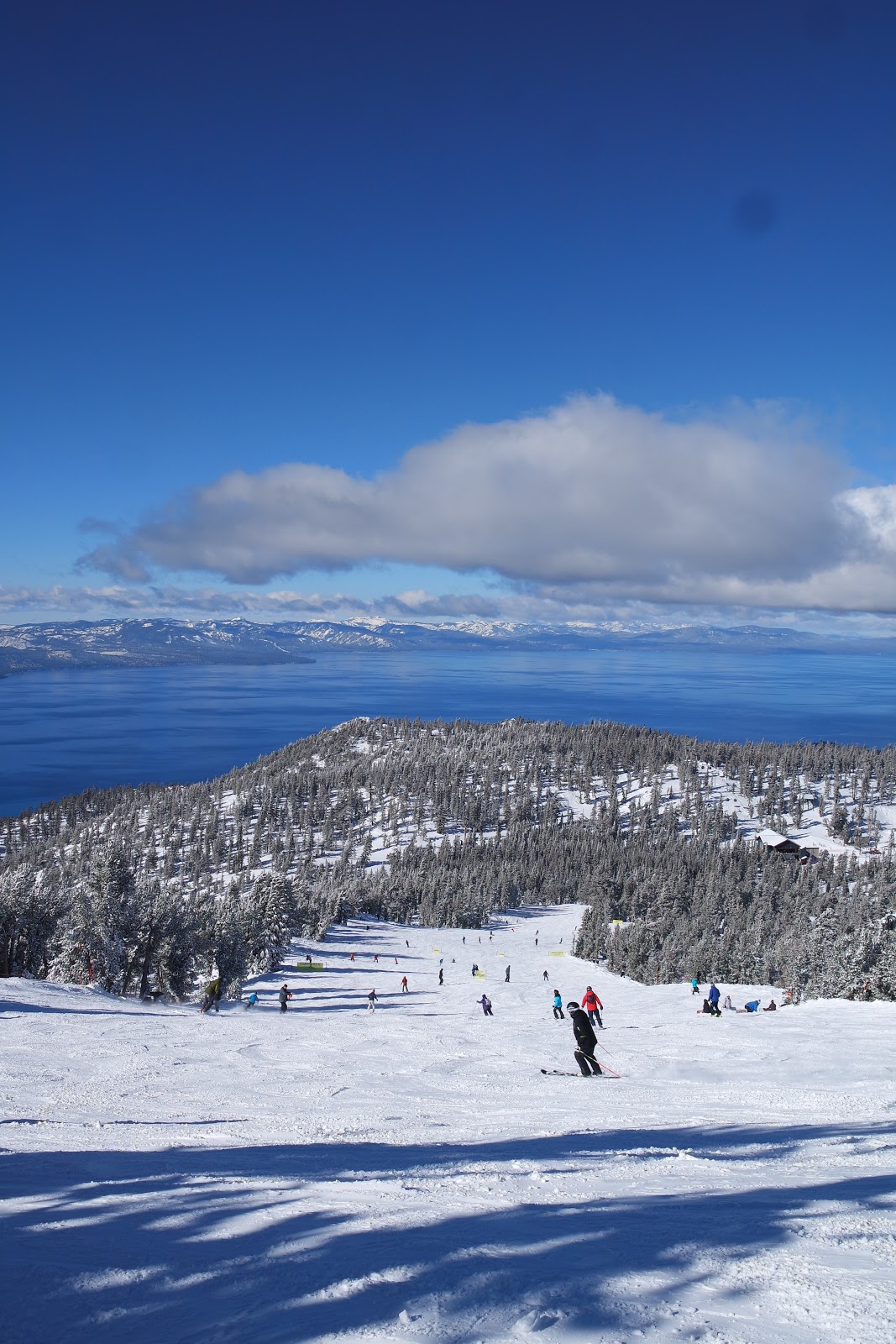 Yes, I skied down this!
I eventually skied my way onto another part of the mountain, and after what felt like risking my life a few times on the intermediate slopes, stayed on the easy slopes for the rest of the day. I bumped into my roommates in the easier area and they were confused as to how I got there. They (and I) were amazed to find out that I skied over two mountains to meet up with them! I enjoyed my time going up and down the "big easy" much better than doing harder runs and then when I had enough, waited for them in the lodge before going down the mountain. 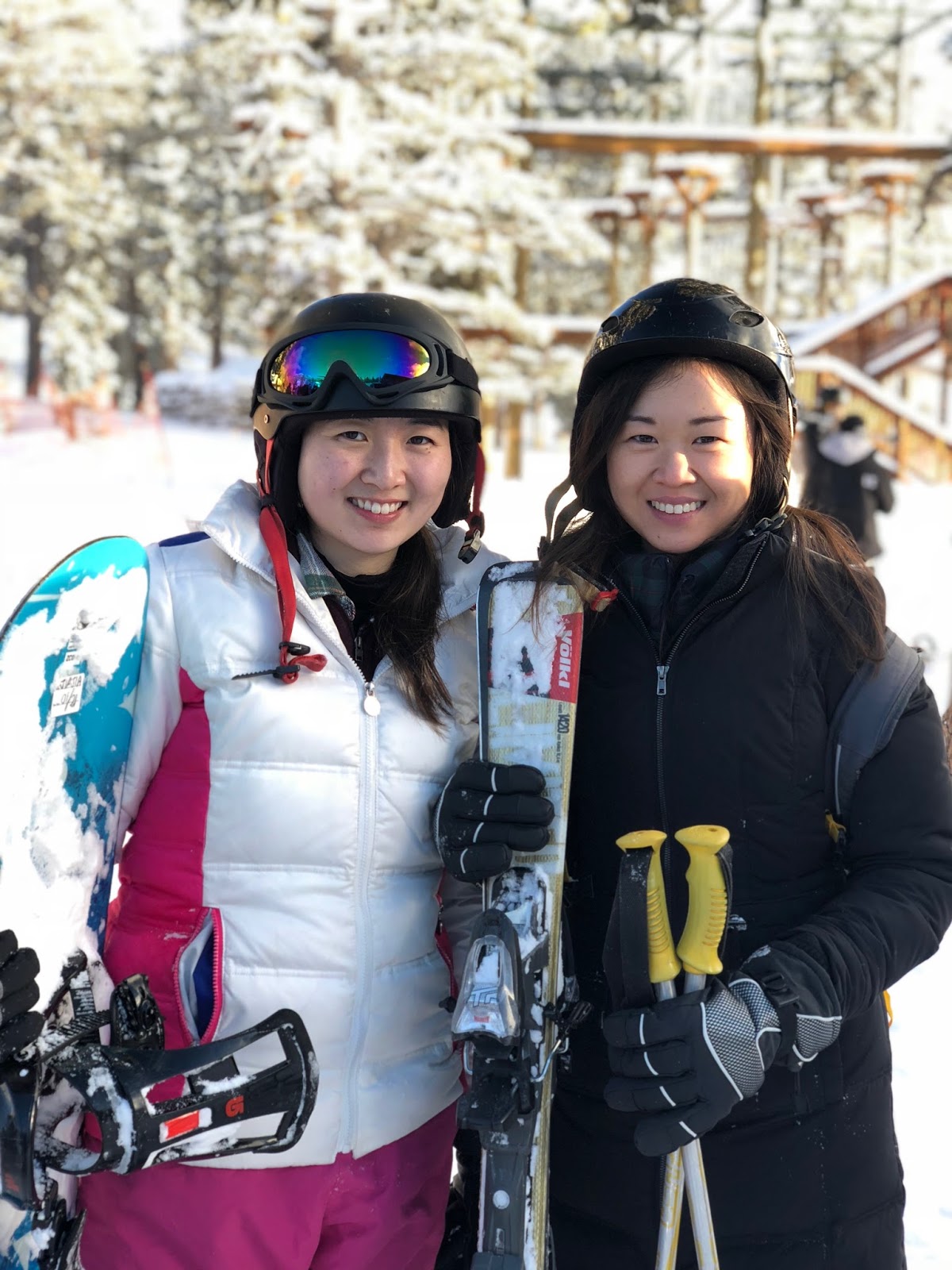 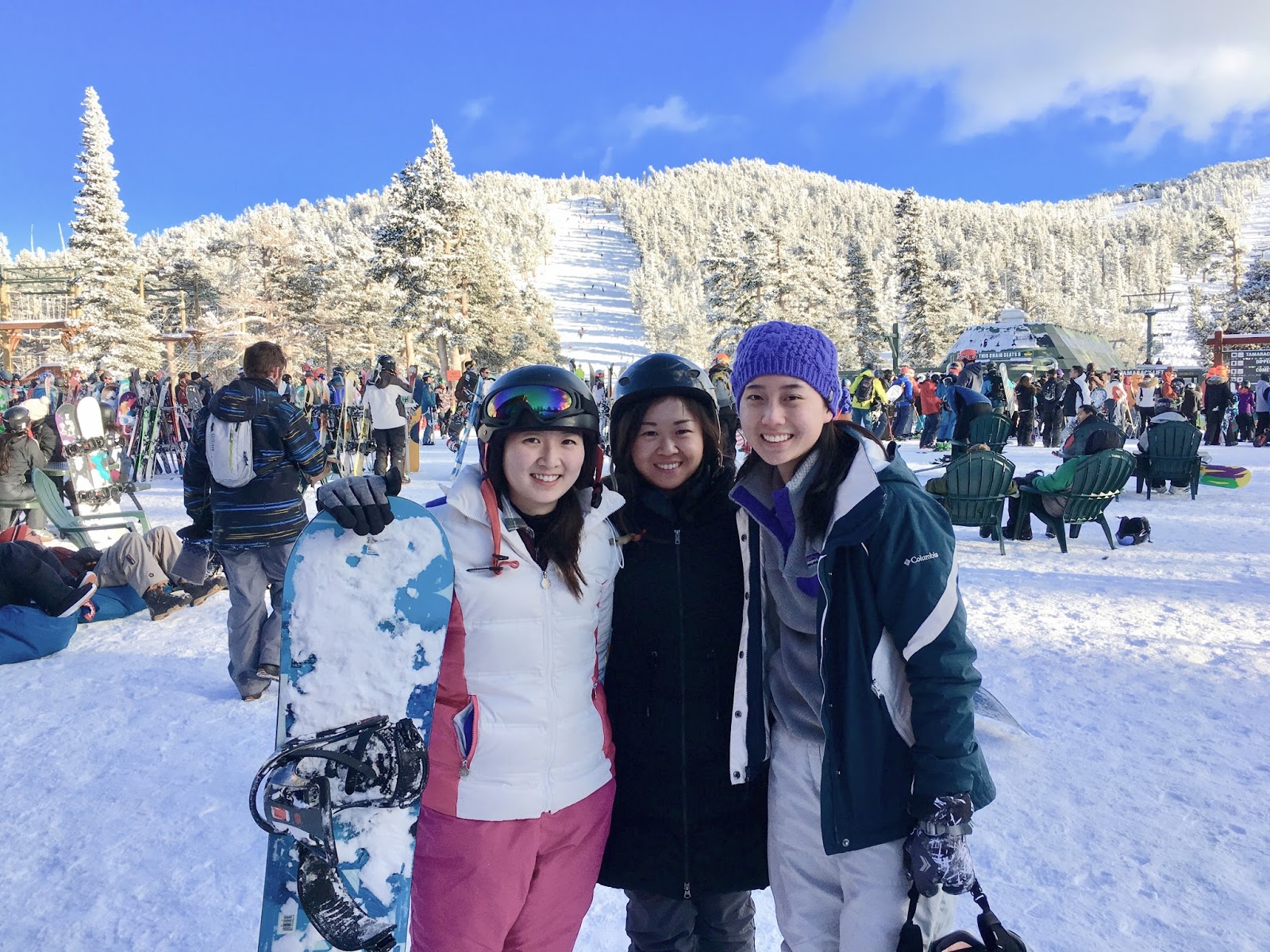 I had only bought a one day ski ticket, so the next morning I stayed in and relaxed in our winter wonderland Airbnb, which we finally made it to after the disastrous first night. A few days before our arrival there was a massive snowstorm in Tahoe which created some treacherous roads leading to our Airbnb. The other car in our group had gotten to the road leading to our house first, and were told by police it would be another 2-4 hours before the road would be cleared, so we ended up meeting up with them at a roadside motel/casino. After a few hours, they went back and checked and the roads were still closed, so we made the decision to cut our losses and just stay at the motel for the night (thankfully they had enough rooms for us). Granted, it was already midnight when we arrived in Tahoe and so by the time everything was said and done, it was around 3 am when we finally were able to sleep. And then we woke up at 7 am the next day to go skiing. Needless to say, the entire group was tired but I was the only one who decided to hang back and take it easy the second day. 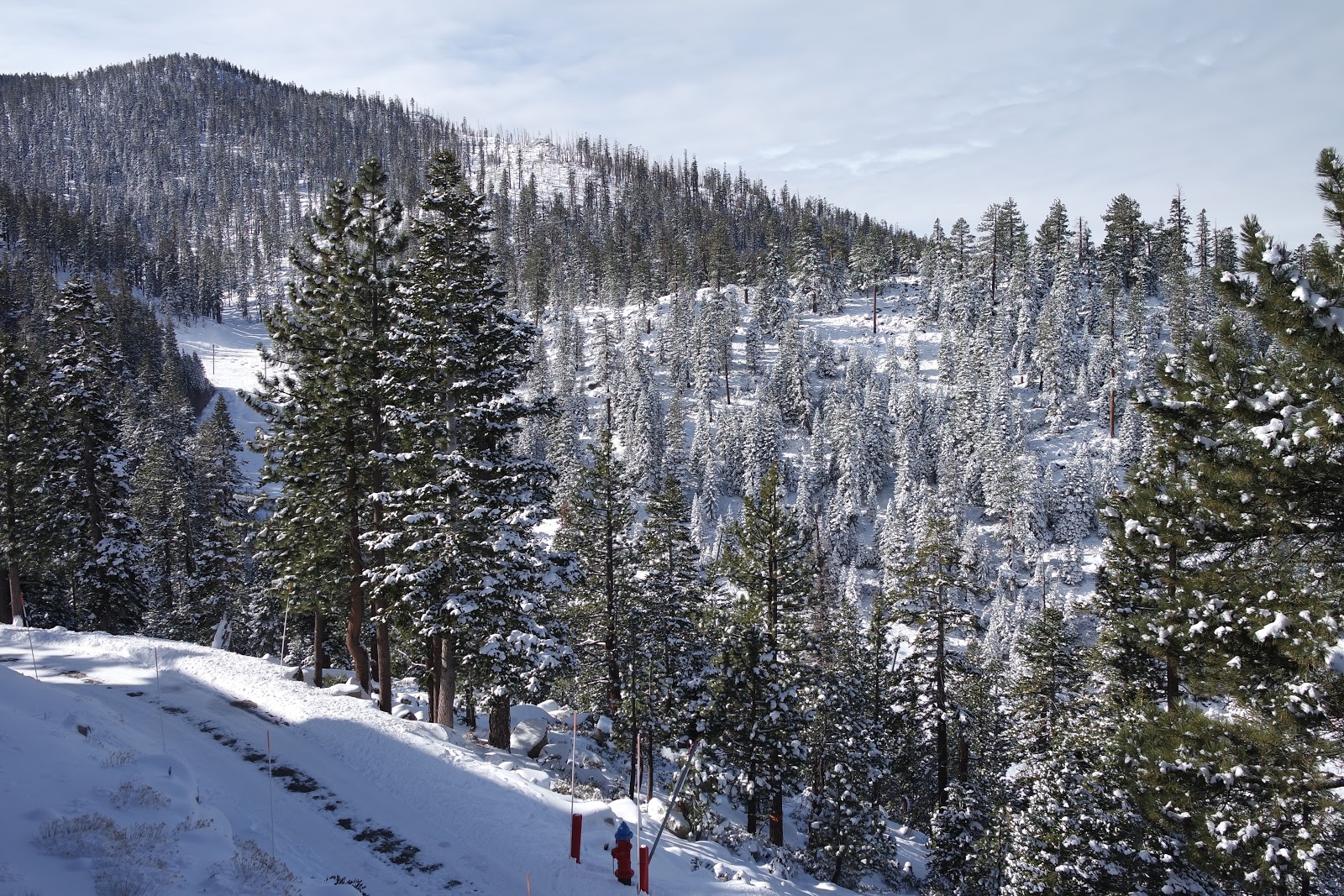 Since we never made it the first night, the host let us check out late the next day so I had the entire cabin to ourselves while the group went back up the mountain to ski and snowboard. I made myself some coffee, cleaned up the apartment, snapped some pics of the beautiful interior and sat by the roaring fire as I watched the snow fall outside and didn't feel like I was missing out one bit. That morning I spent in the cabin was just heavenly and provided some much needed R&R on that busy weekend getaway. 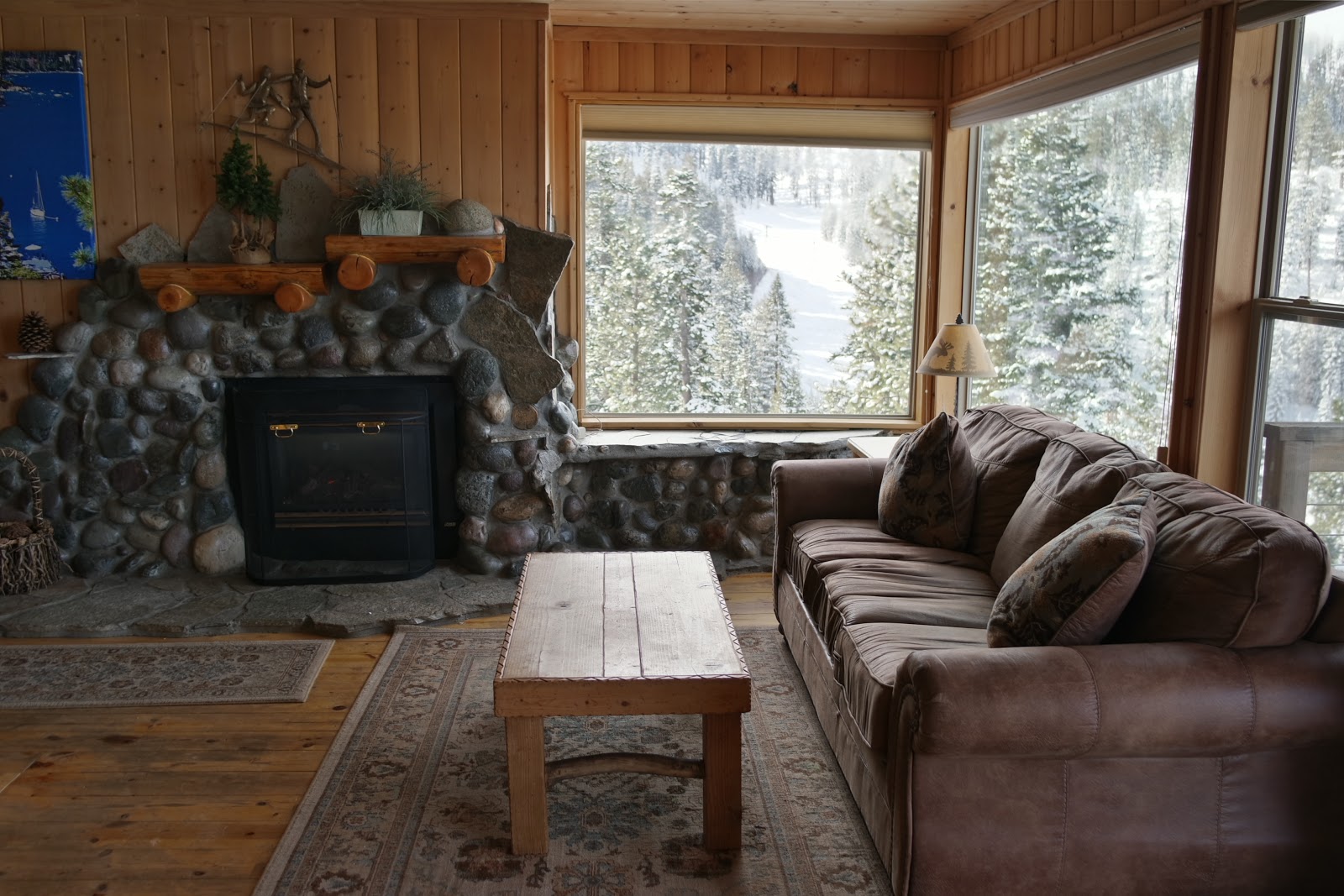 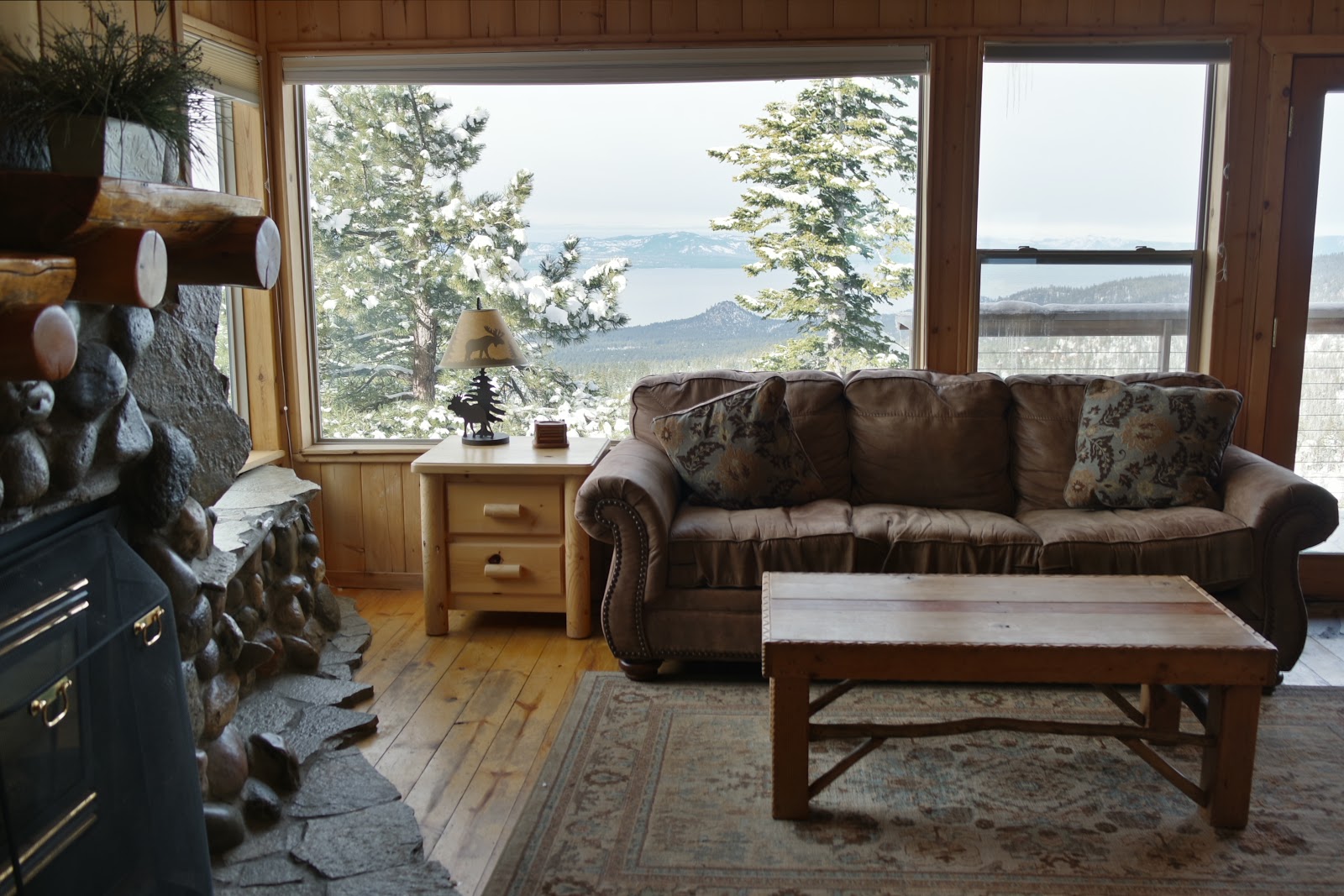 Such a picture perfect winter wonderland 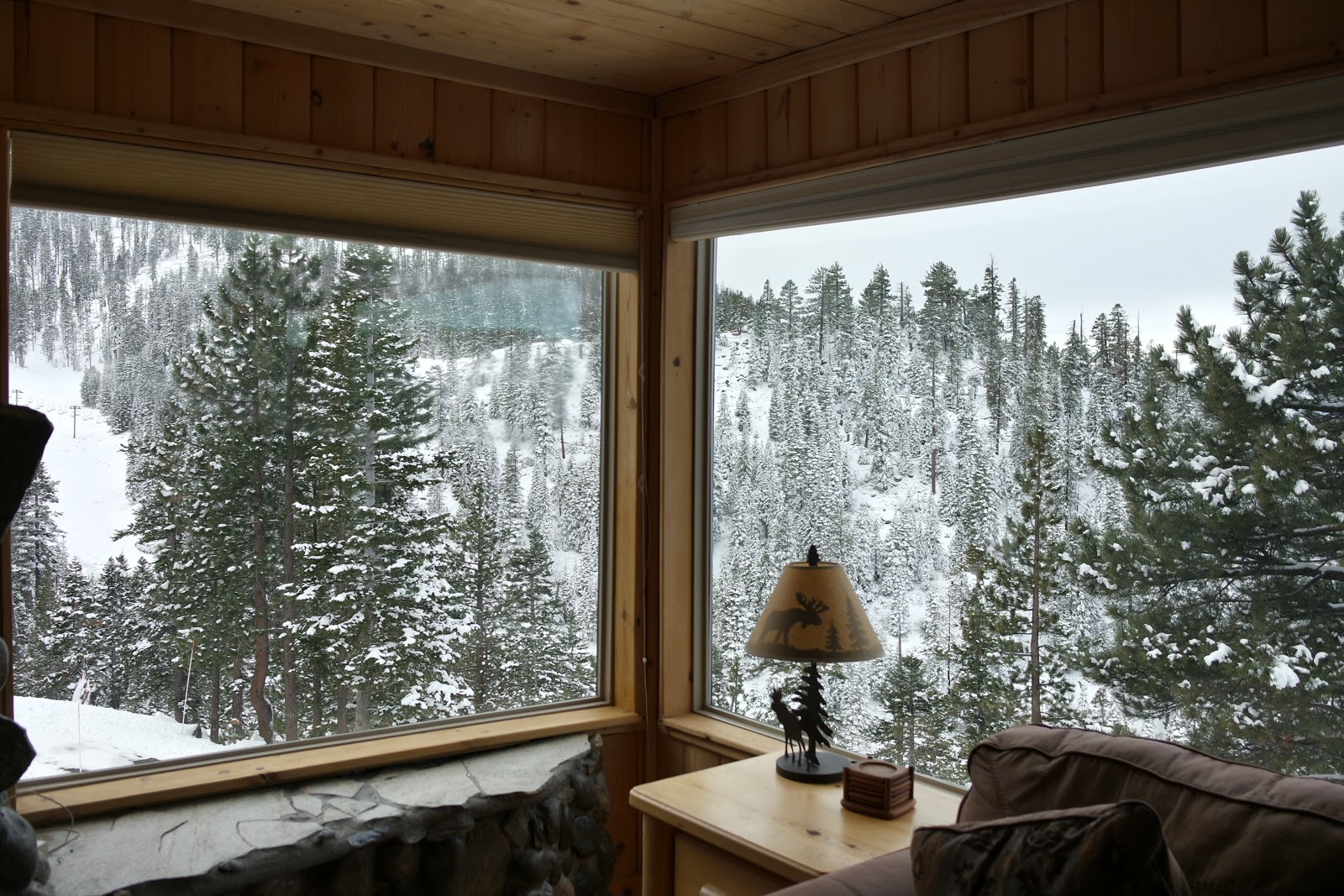 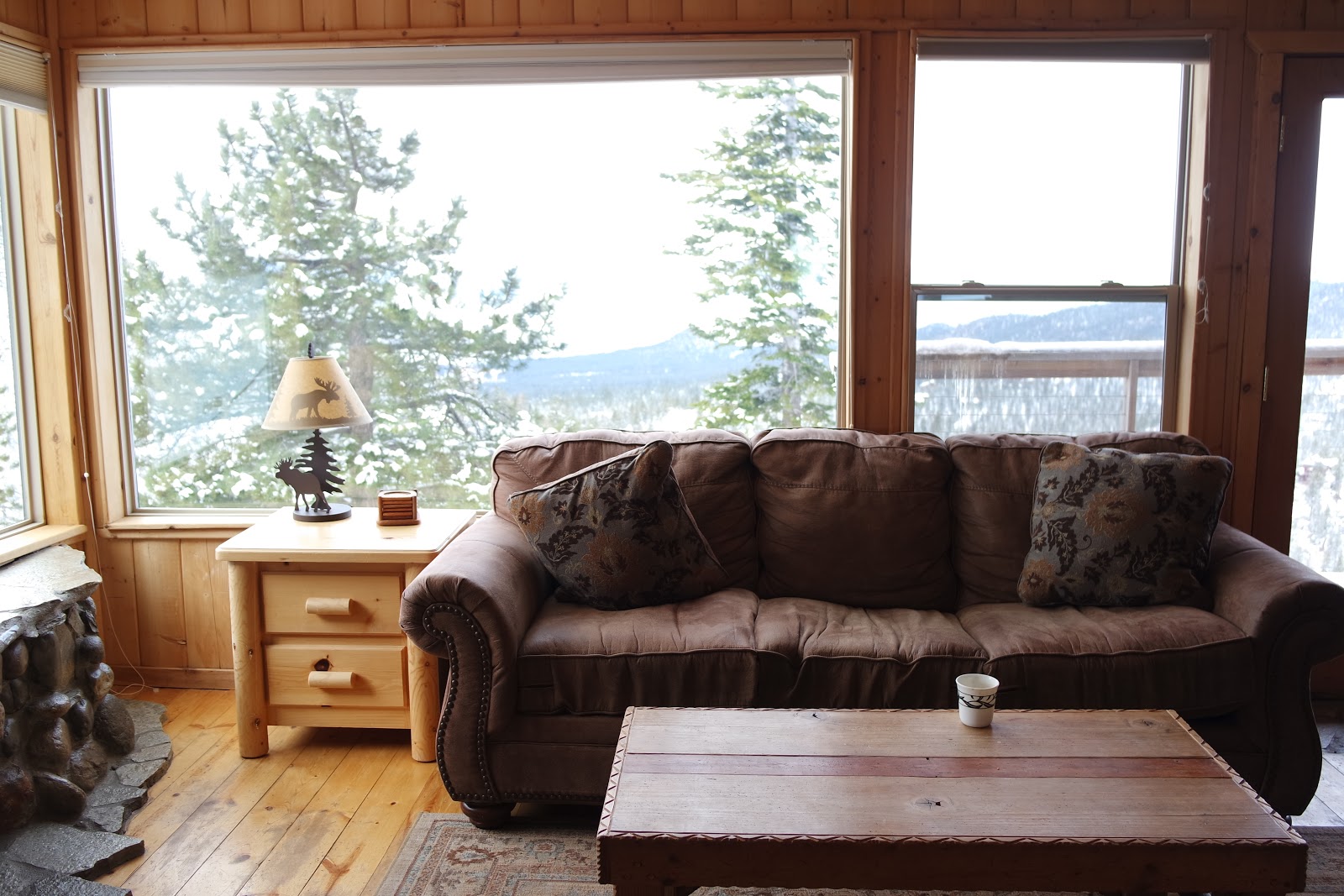 So glad I curled up on the couch inside 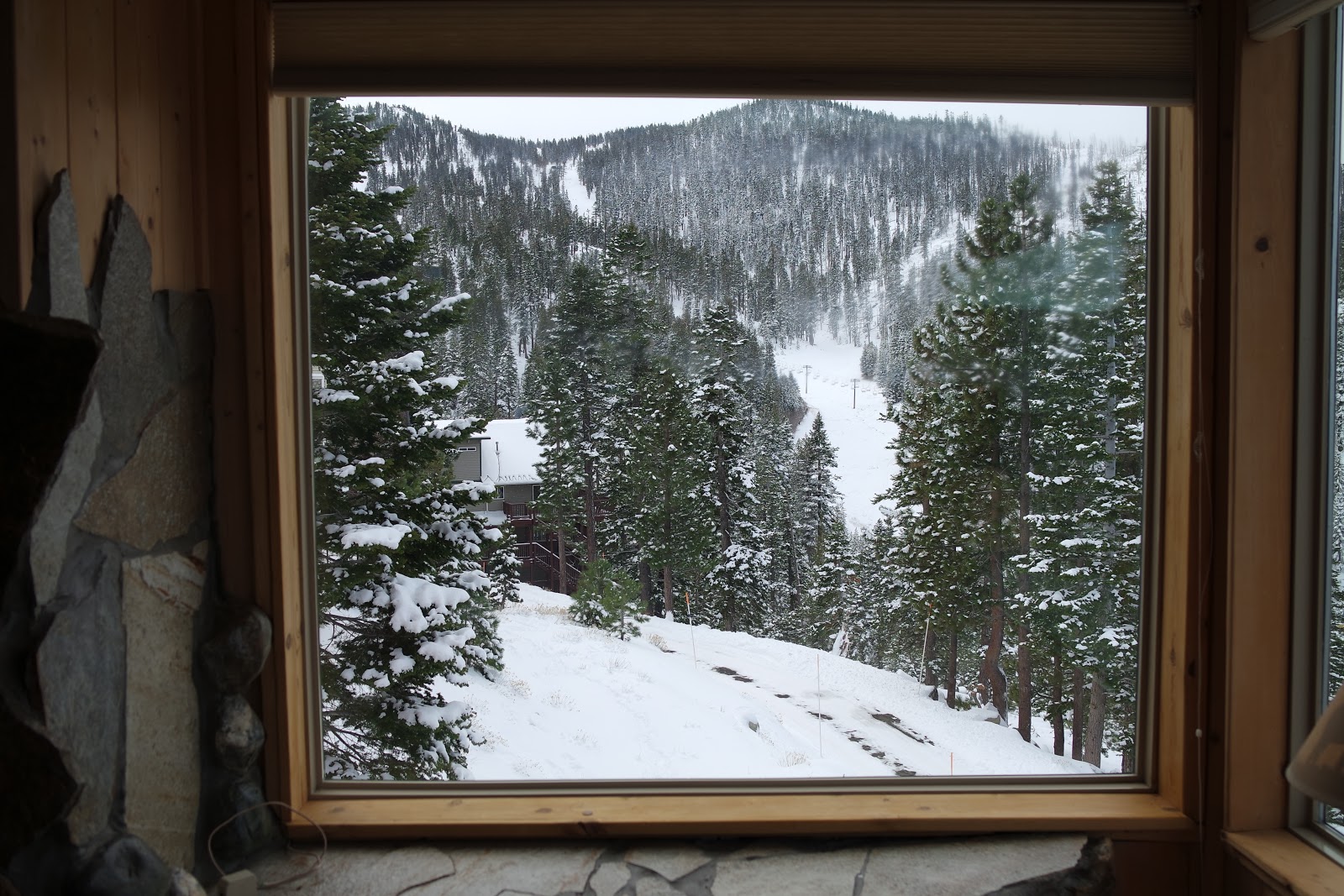 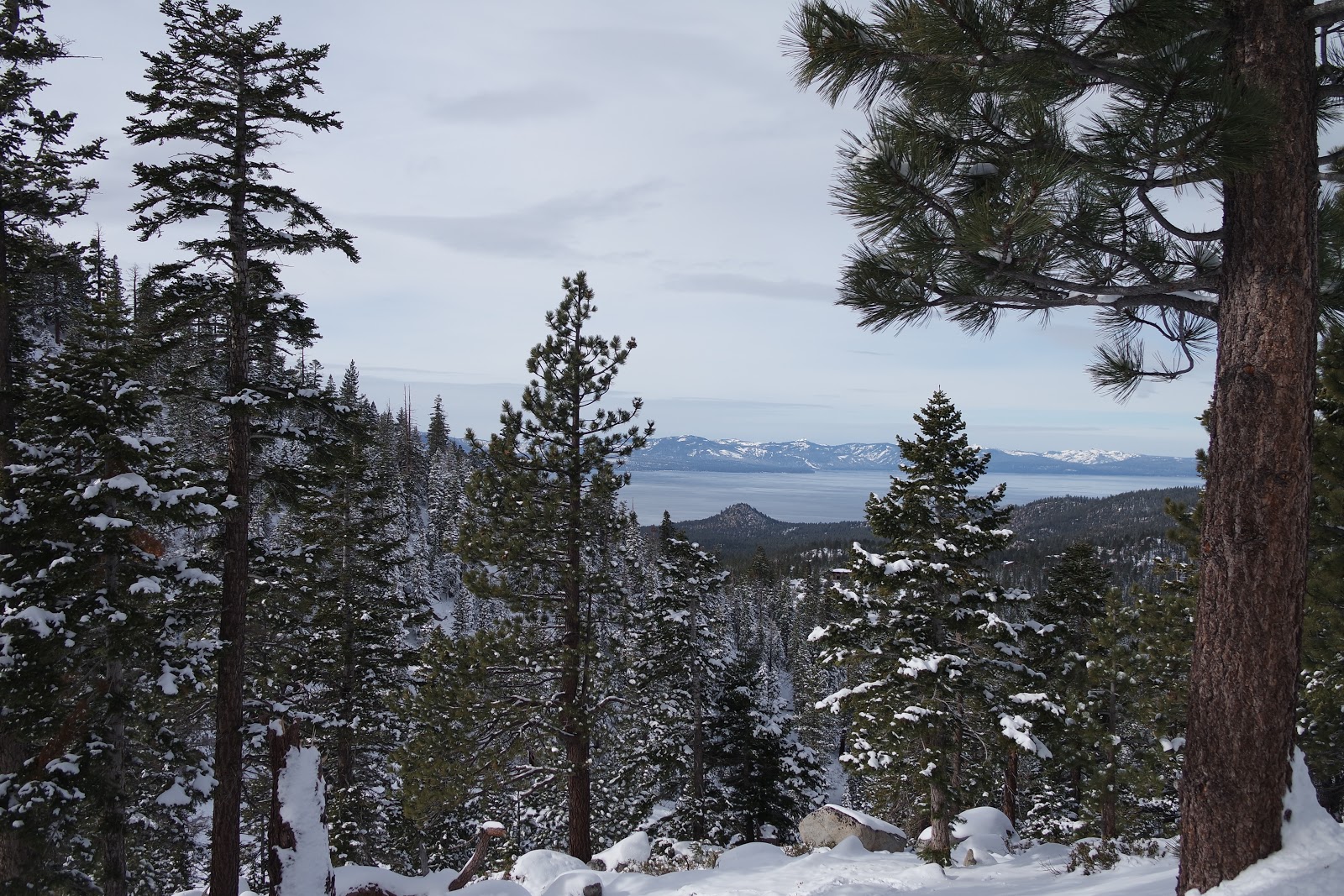 View from the balcony
All and all, I think I ended up getting the best of both worlds on this trip, a chance to ski in world famous Tahoe and a peaceful morning in a cozy cabin. While I can't say I'll be back any time soon, I'm glad I got to experience skiing in Tahoe and can definitely see the appeal of weekend getaways to the lake. Apres ski!
Labels: travel