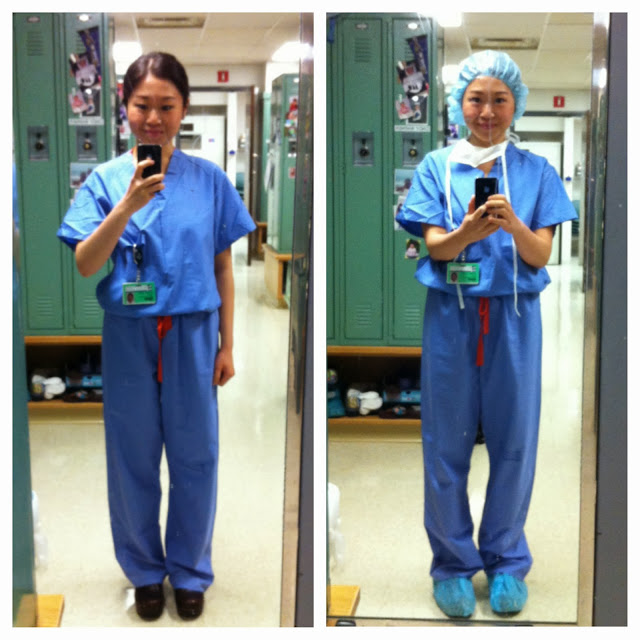 I've officially finished my OB/GYN rotation. My second shelf is over and done with and I'm currently in the Dulles United Club waiting for my flight to Beijing!

In contrast to the labor and delivery portion, I really enjoyed the gynecology half of the rotation. At BWMC, gyn was split into surgery and clinic. I spent most days in the OR, scrubbing in on hysterectomies (removing the uterus +/- ovaries and fallopian tubes), hysteroscopies (the most boring procedure ever - just sticking a long camera scope into the uterus and looking around to find any polyps - takes 10 minutes, tops), tubal ligations (tube tying), and myomectomies (removing fibroids from the uterus). One of the highlights was doing an open myomectomy. Below is all of the 31 fibroids, from pearl size to clementine size, we removed from a woman's uterus! Imagine that all of these firm balls, bening tumors really, infiltrating your uterus, making it grow as big as a pregnant uterus, hindering fertility, causing pain, and bleeding. Pretty unpleasant, but up to 80% of women will develop fibroids at some point in their life. This patient was actually young and still desired children, which is why we decided to do it open (vs. laparoscopic or robotic). We wanted to be more careful to preserve the healthy parts of the uterus, called the myometrium, so she could conceive in future. Digging out these fibroids was like shucking for oysters! After we were done, even the two surgeons remarked that they had never removed so many fibroids. 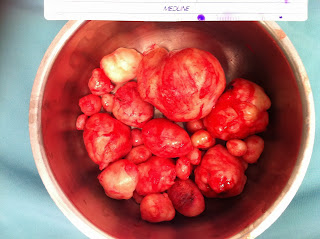 One of my favorite parts of this rotation was seeing patients in gyn clinic. Women of all ages came in for various female issues, birth control, pregnancy, abnormal bleeding, menopause, STDs, and well-woman exams (your annual breast and pelvic exam) and it was really rewarding to talk to them about issues and questions all women have. I saw almost 20 patient a day, taking their histories and performing the breast/pelvic exam on them. I even prepped slides and diagnosed yeast infections/STDs sometimes. I'm now an expert vag examiner! On a serious note, I also got to see and diagnose cancer. One of the first days in clinic, I saw a woman who complained of a vaginal tear and I just assumed it was because she was too dry down there. When my attending saw the "tear," she took a step back and immediately ordered a biopsy of it. After we exited the room, she told me she suspected it was late stage cancer. Sure enough, a week later, it came back as Vulvar Intraepithelial Neoplasia Type 3 (VIN 3), which is the most advanced precursor to cancer. It wasn't quite cancer yet, but something like 30% of these will progress to vaginal cancer, which has a horrible prognosis and is very rare. Another day, I was counseling a woman about different birth control options before we did a routine breast and pelvic exam. When she laid back, I noticed some retraction on her left breast and felt a large lump. My attending immediately sobered up when she felt it and afterwards, she told me she suspected it was breast cancer. She ordered a diagnostic mammogram right then and there and ordered the patient to get it. That very same day. I just learned yesterday that it was invasive ductal carcinoma. I liked how the gyn portion of ob/gyn encompassed the whole scope of well woman care, and I think I have it in me to be a gynecologist, but I could never do OB. Flight's boarding, I'll update in Beijing!!
Labels: medicine