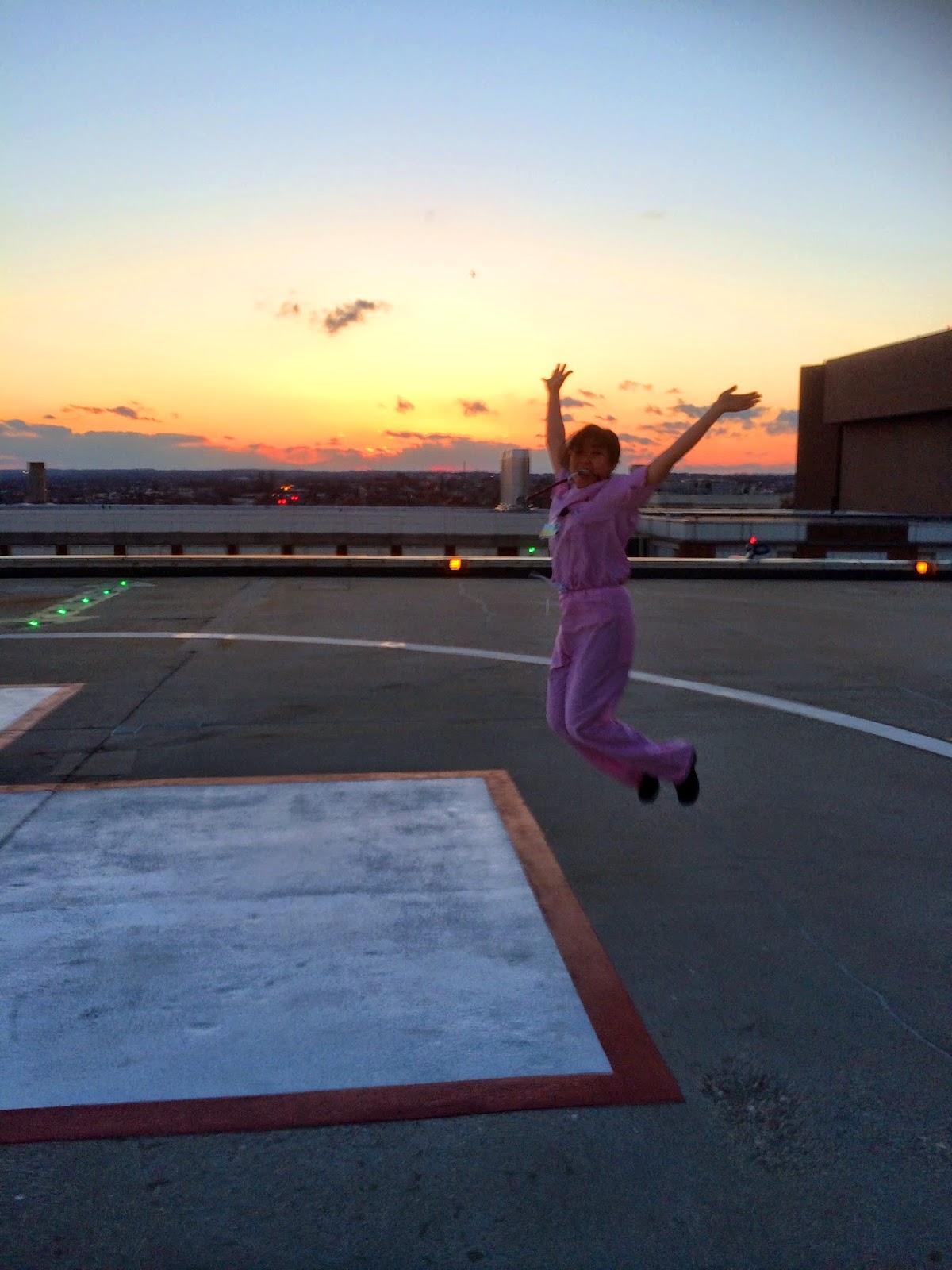 Excited for TRAUMA!
For med students at Maryland, rotating at our world famous R. Adams Cowley Shock Trauma Center (Hopkins aint got nuthin on STC) is a rite of passage. Wearing the hallmark pink scrubs, taking overnight call every third night with the residents, running up to the helipad, doing chest compressions on a dying patient, scrubbing in on urgent surgeries in the middle of the night, were everything I was looking forward to during my two weeks leading up to spring break. 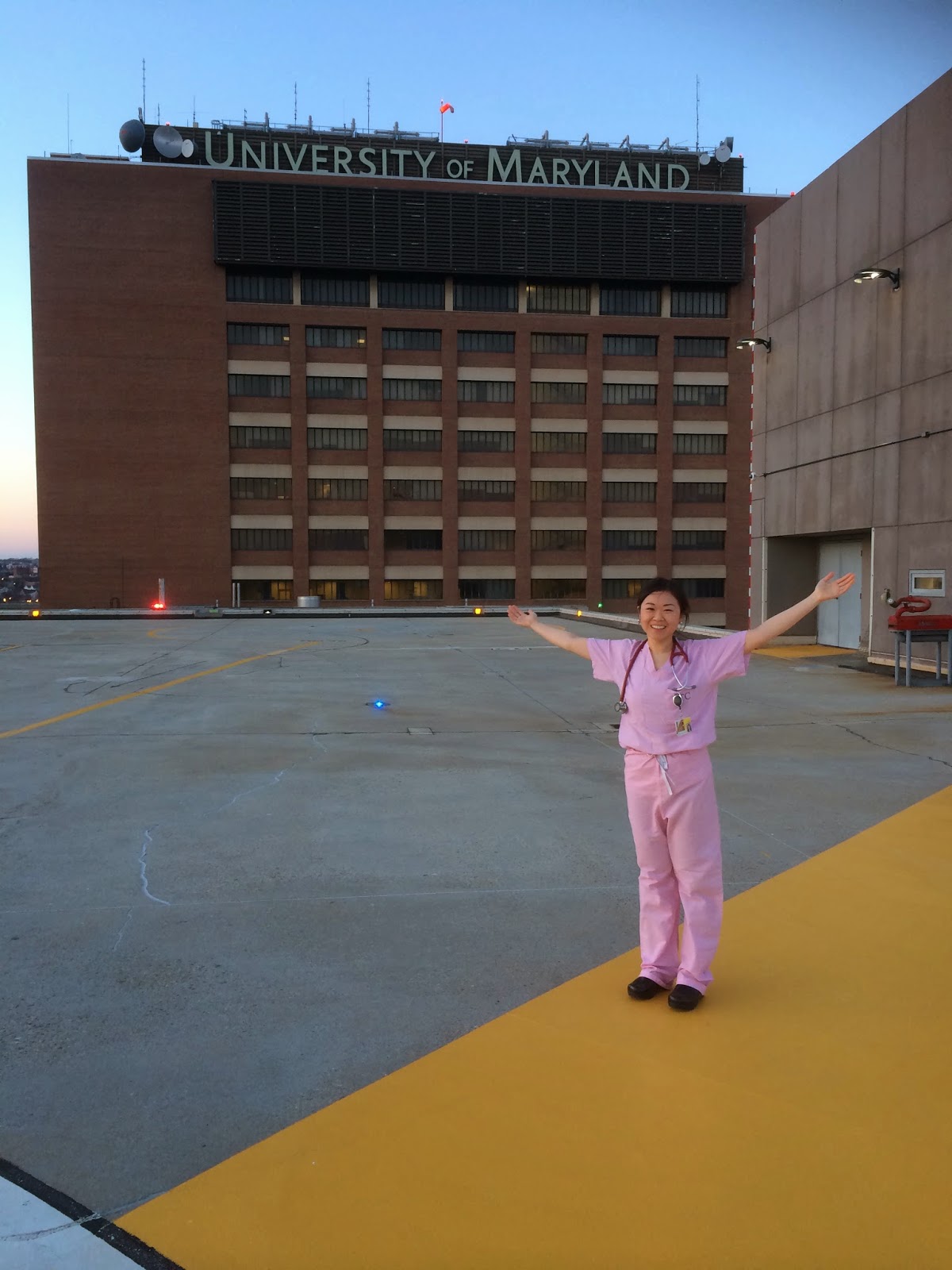 Even though we do two weeks on trauma during our surgery rotation (2 months total), the rotation was actually much more centered on emergency medicine and ICU medicine. Most of the time we were on the "floor" managing critically ill patients, many of whom just had major surgery, were on ventilator support, couldn't wake up, or were intubated. It was my first exposure to how to manage these patients who didn't have just one problem, they had problem with every major organ system and were staying ahead of death one day at a time, a real eye opener for sure. Then every third day, we were triaging new patients in the TRU (Trauma Resuscitation Unit), basically a glamorized ER where every traumatically injured patient in the DMV was brought in. I expected to see GSWs, stab victims, lots of car crashes, maybe some drownings or burn victims, some TRAUMA for cryin' out loud--but luckily for the residents of Maryland, those were few and far in between. I saw a total of 3 GSWs and 2 were self-inflicted in acts of stupidity and/or suicide attempts. The one real GSW was dead on arrival and after 5 minutes of CPR, was too far gone to attempt any further resus. Instead, we got a lot of falls, falling from standing, falling from wheelchair, falling from ladders or stairs, and one case of a lady falling from a moving truck (she ended up getting brain surgery and was still in a coma when I left).

Not my pic, but this is what it's like when they first wheel a patient into the TRU. We would be the people gowned and gloved waiting for the patient to be moved to the bed.

Most of the time, I had no idea why these people were transported or flown to Shock Trauma, when they would have been fine being managed closer to home, like car crash victims who were transferred to us 12 hrs after their accident who were entirely stable, or a lady who jabbed herself in the eye with a wooden pole and cracked her orbital bone but who was fine otherwise (hint, if you can walk into the TRU, you do not belong in Shock Trauma). In the event of a "priority" victim though, shit got real. We would gown up, the lead resident would assign tasks to the doctors (e.g. you put in the central line, you do the chest tube, you intubate) and everyone would swarm around the patient when they were wheeled in, making sure they could breathe, putting in lines, and assessing the amount of injury. As a medical student, my job was to do the FAST (focused assessment sonography for trauma) exam so we could quickly scan in the abdomen to check for internal bleeding, check pedal pulses, help take off their patient's clothes, and otherwise get out of the way when all hell breaks loose. Sometimes they would "reward" us by letting us sew up lacerations! Whenever they wheeled a new patient in, my partner and I would start scoping them out for lacerations because we knew we could practice sewing them up. The last day I got to put in 12 stitches on a leg by myself!

Pure madness when a "priority" comes in. A sea of doctors and nurses swarming around the patient.

Like much of medicine, there were really exciting moments and then a lot of sitting and waiting around for the next patient to come in, even in trauma. If there wasn't something going on, somewhere between 2 am and 5 am, I would lie down in the call rooms for a bit, and was actually able to get an hour or two of sleep a night, which isn't bad by trauma standards. It wasn't this constant never ending stream of dying patients that I imagined (although it may be busier in the summer, when more people are getting into trouble). Hence, my partner and I would take a food break like every hour, and get ice cream every call day. Froyo = trauma life. 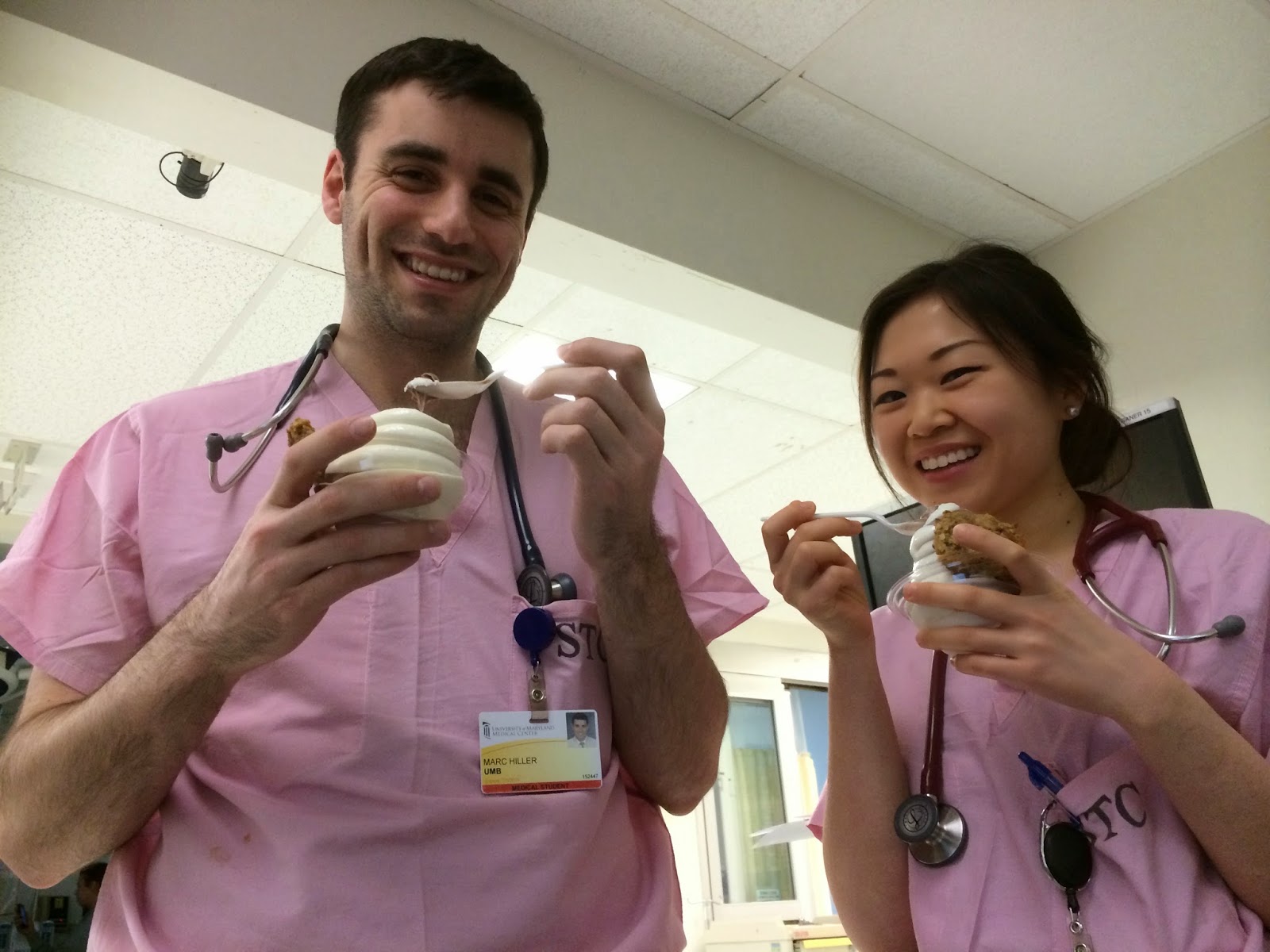 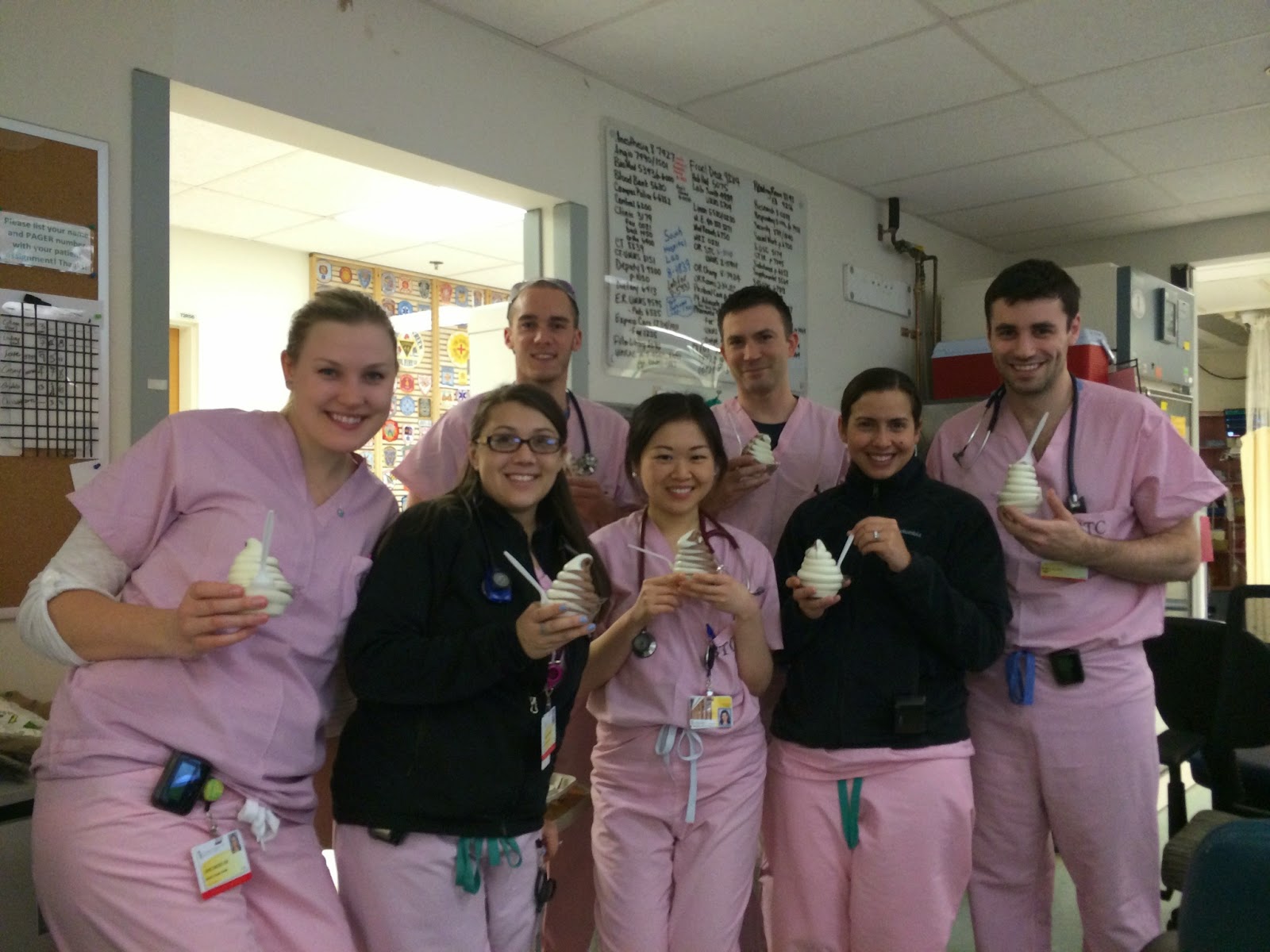