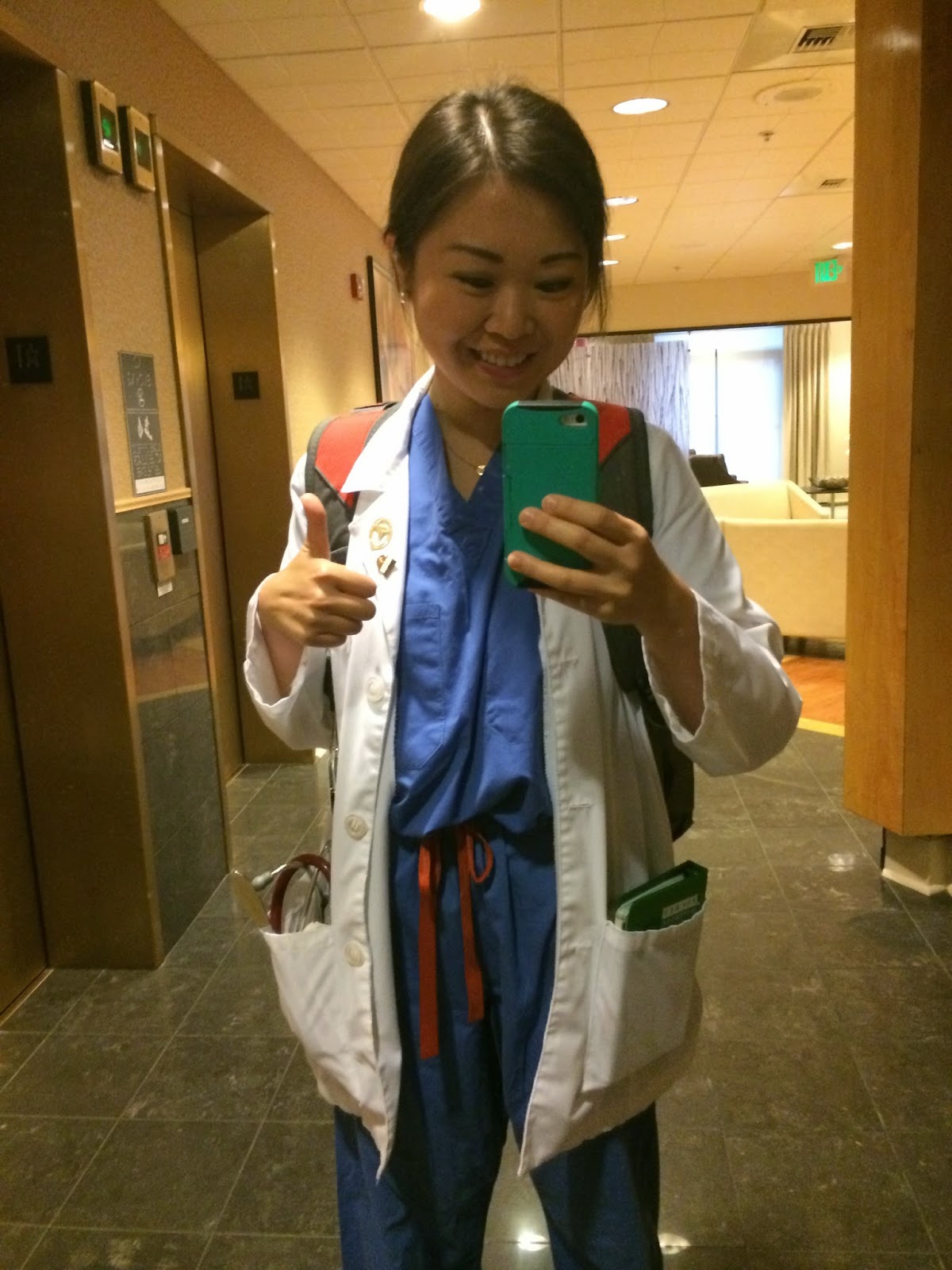 Excited for my first day as a sub-I! That excitement quickly gave way to exhaustion...

This past month I completed my toughest month of med school -- my sub-internship in Internal Medicine at the Baltimore VA hospital. It's a one month trial period where you think and act like an intern, assuming primary responsibility for your patients from the moment they step into the hospital to the moment they are picked up. Whenever the nurses and other doctors would want to speak to a patient's provider, they would call me. While it was empowering to actually be in charge of someone's care, with power comes responsibility. One of my hardest mornings was when one of my patients suddenly deteriorated right in front of me and became increasingly short of breath, requiring higher and higher concentrations of oxygen to breath. I was paralyzed as I had to coordinate calling the medical ICU, order drugs and inhalers, tell the nurses what to do and what drugs to give, and try to draw blood so we could run a blood gas, all while he was gasping for breath in front of me. When all was said and done, we did get him stabilized, but he was transferred to the MICU and required intubation soon after.

But it was also filled with good moments, such as having the old vets tell you stories or give you life advice. Or being the one person able to put an IV in a patient when all the other nurses and doctors failed. And being the one that saw them through their stay in the hospital and made sure they didn't die. The patients as a whole were a great group to take care of, for the most part very patient and respectful. I've heard you remember the patients you had in training your whole life, and I already know I'll always remember the patients I had during my sub-I because this was the first time they were solely my responsibility.

Overall, I felt infinitely more confident and competent than I was in third year of med school. In third year, I had no idea what I was doing so I was afraid to even sit down or go to the bathroom without being told I could. Now I'm not longer scared of patients, nurses, other doctors, and feel free to do whatever I want, for the most part. I felt like my knowledge base was comparable to that of an intern, knowing at least the basic treatments for the basic medical illnesses in the hospital like a pulmonary embolus, a GI bleed, or alcohol withdrawal.

But that q4 call schedule....we were "on call" in the hospital every 4th day (including weekends) meaning we would have to stay until at least 9 pm, admitting up to 10 new patients that day and also covering patients on other teams (probably 50 patients total!). Needless to say, call days were the worst because you could get up to 5 new patients per intern (two for me as a sub-I) and you had to admit them and work them up from the beginning. The other three days you would basically follow up with the plans you made the first day and see the patient through. Some call days I wouldn't leave the hospital until 11 pm! To get back to the hospital at 6:30 am....so glad that's over.

Now I'm taking a elective which makes all the difference in terms of time commitments. I'm doing rheumatology, which is basically clinically immunology and the muskuloskeletal system (i.e. arthritis all day erryday). There have been some cool cases, like a woman who had sudden onset of proximal muscle weakness that left her unable to lift her arms or legs (and even left her with difficulty swallowing) and an old man who suddenly developed gangrenous digits everywhere and who had to most of his fingers and toes amputated (we think it's due to a rare immunologic phenomenon called cryoglobulinemia). It's mainly been a light rotation though, since these are rare diseases and there are hardly rheum emergencies. I've been using the welcome down-time to study for my Step 2 CK test, the last standardized test I'll have to pass to become a doctor, at the end of the month. My roommates have moved out too, leaving my apartment all too empty and quiet lately. There'll be lots of changes coming ahead...

In the next month, I'll have taken Step 2 CK, an 8 hour exam, have submitted my application for residencies, and flown to LA to complete an away rotation at UCLA. In October, I'll be going to Philadelphia for the clinical skills portion of Step 2 and completing a rural family medicine rotation in Southern Maryland where I'll be staying 4 days a week. Then in November, interviews start. I just can't wait to finish all of these tests and requirements so I can get to the fun part of 4th year! Counting down the days until September 15...
Labels: medicine