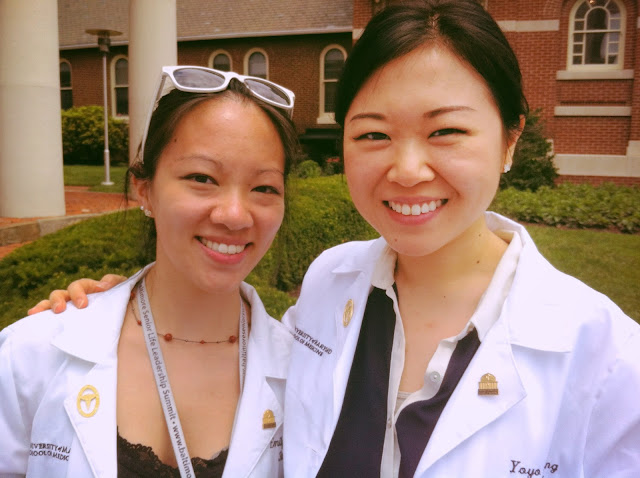 E and I at the Student Clinician Ceremony

Like everyone else, I seem to have been insanely busy in the past few weeks. Two weeks ago, I finally took my boards. It seems surreal that it actually happened, like a dream (or if my score comes back subpar, a nightmare). Two years' worth of anticipation, one year's worth of anxiety, and 6 weeks of nonstop studying from 8 am to midnight, one horribly hard and grueling 8 hours, and it was finally just over. Coming out of the test, I didn't know what to do with myself. What was I supposed to do with this so called "free time"? Luckily, I didn't have too much time to dwell on the test because 18 hours later, I was off to Montreal, Canada with my two best friends from high school!

The road trip we took from Maryland => Baltimore => Boston => Burlington, VT (plus the Ben and Jerry's ice cream factory) => Montreal was honestly one of the best times I've had in a long time. So much laughing and so many inside jokes were had. It's cheesy, but we know each other so well (almost 10 years at this point!) that sometimes it would only take one word to send the rest of us into laughing fits. R's boyfriend of two years, D, also came along and fit in seamlessly with our little high school reunion group. We only spent about 2 whole days in Montreal, but hit all of the high marks: we ate Montreal's most famous foods (poutine, foie gras, Schwartz's), explored the botanical gardens, and went out one night to a speakeasy called Big in Japan (where I promptly fell asleep after 1 drink). It should probably stay unmentioned that the other night R fell asleep early and the rest of us stayed up until 1 am to watch Independent Day, and after that, Criminal Minds. Like moths drawn to a flame, we also went to Chinatown twice, got froyo and bubble tea every day and of course, had to eat dim sum. Poor D had to put up with our Asian antics the whole trip ;)

The day after J and I got back to DC (R and D flew out from Montreal), I started Third Year Orientation back in Baltimore. It was a whirlwind 3 days. Most of us, like myself, had taken the test about a week beforehand, and so we swapped storied about what we did in the week or few days off that we had. Some others had taken the test just two days prior or even the day before, unbelievably. Even just 3 days of orientation were exhausting. Like most other people, I had put off all of my errands and such until after boards, so orientation was the first time I had opened my computer in over a week and was the first time I had been in Baltimore in over a month. The first couple days of orientation were filled with various computer training modules and procedures during the day and happy hours with friends at night. One night, we went to Captain Jack's, an all-you-can eat crab buffet (only $30!) that captured the spirit of summers in Maryland perfectly: bushels of steamed crabs covered in Old Bay and butter, pitchers of Natty Boh, sunset on the dock, and catching up with friends with nowhere to be for the night (but a final round of 8 am orientation the next morning). 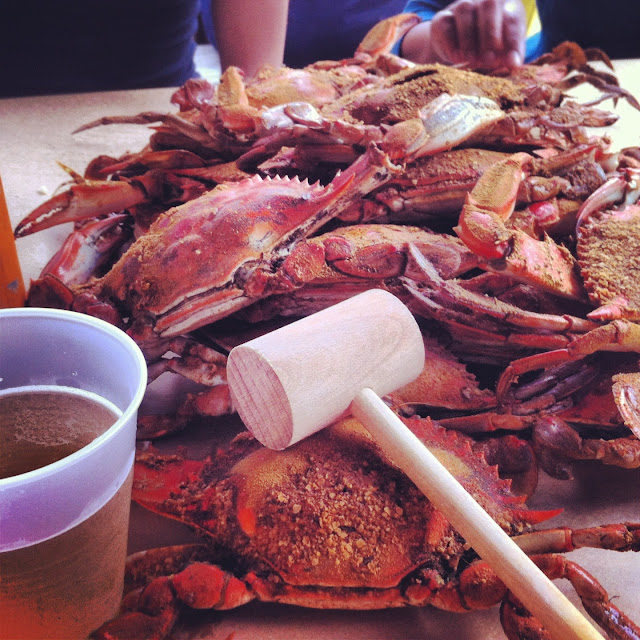 The last morning of orientation, we sat through intimidating lectures about physician depression (3x as high as the general population), physician suicide (something like 5x as much as the general population, even more so for women), and sexual harassment  Necessary and important information, but it didn't do much to soothe my nerves for Third Year. Finally, we capped orientation off with our Student Clinician Ceremony, where we got a symbolic second pin for our short white coats and recited the Student Clinician oath, which represents our transition to the clinical years of medical school and the start of actually becoming a clinician. It's finally happening! The last few weeks have been so fast paced that I haven't even had time to process whether I am ready or not. I haven't had any time to prepare, order books, or supplies, or study in the past few days, just tried to enjoy the last few days of freedom before living my life in 4 day cycles ("q4 call," e.g. staying late in the hospital, from 6 am to 10 pm every 4th night). I have no choice--it's sink and swim. I just hope I don't sink too deeply tomorrow at my first rotation...in Pediatrics! 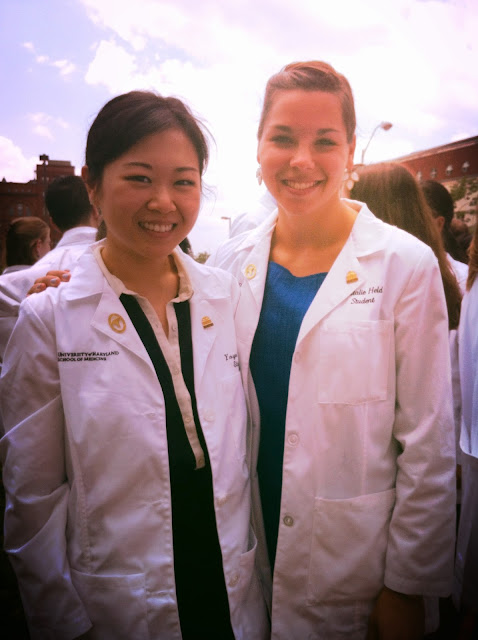 Bring it on, Third Year!